Save
The Strange Beauty of Soviet Sanatoria
Share
Or
Copy

Khoja Obi Garm is a Soviet sanatorium nestled high in the mountains of Tajikistan – a place known for its curative, radon-rich waters. When Maryam Omidi, a former journalist, visited in 2015 she was "blown away" by both the architecture and landscape: a enormous concrete, Brutalist block at the peak of a snow-capped mountain. She has since launched a Kickstarter campaign to develop a book of photographs exploring "the best sanatoriums" across the former Soviet Union. 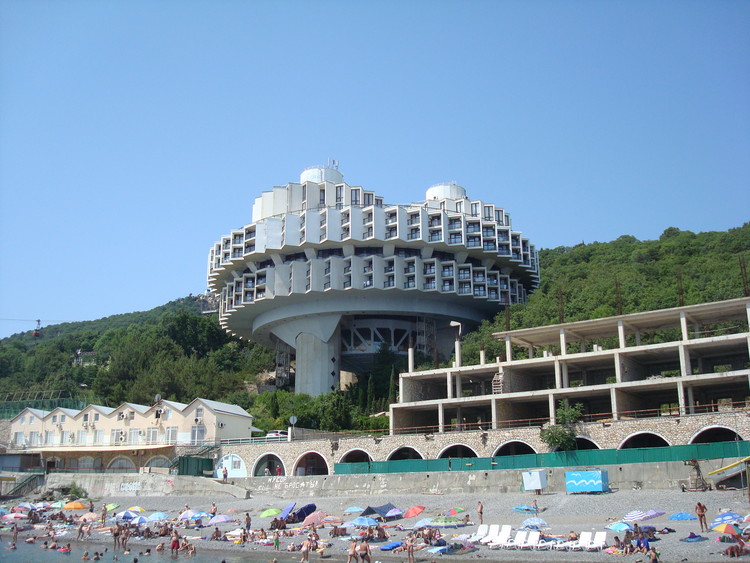 "The treatments, such as 'hot treatment radon water sprinkling method between legs' and 'friction and shaking with medical electrical equipment,' were as peculiar as their names suggest. I remember walking into the swimming pool on my first day to be greeted by a group of Tajik women, totally naked, their pendulous bosoms bobbing up and down in the water and their smiles flashing gold teeth. These were the women I’d spend the next few days with – swimming, chatting, eating, dancing, and sweating it out in the sauna."

Soviet architecture often conjures up images of monolithic building blocks, but the era’s sanatoriums are among the most diverse and experimental structures of that time. Similar to modern-day spas but with a strong medical component, Soviet workers would spend a week or two each year at a sanatorium, paid for by the state, so that they could recover from the exertions of their labour.

From the steppes of Kazakhstan to the wine-growing regions of Georgia, our team of six photographers and one writer will travel across the former Soviet Union to document the best sanatoriums from this era. Expect lush interiors, evocative portraiture and stunning architectural photography alongside in-depth interviews with guests and employees.

A History of the Soviet Sanitorium

Today there are many sanatoriums sprinkled across the post-Soviet space in varying states of decay. Their construction began in 1920 and continued right up until the collapse of the Soviet Union. According to Professor Diane Koenker, by 1922, two weeks of annual holiday were enshrined in the labour code and at their peak in 1990, the Soviet Union’s sanatoriums could house more than half a million guests at any time.

The question of leisure was one that preoccupied Soviet thinkers; free time and work were not separate but connected with the former seen as a way of increasing productivity. The spirit of the annual sojourn was pithily captured in 1966 by S. Antonov, a metal fitter and model of socialist labour, who told a newspaper: "I receive my vacation once a year and I try not to waste a single day of it in idleness."

Soviet workers were sent to sanatoriums once a year so that they could return refreshed and ready for work. Workers in the toughest industries, such as mining, were prioritised over others. Stays at sanatoriums were overseen by doctors; even sunbathing was monitored by health professionals. In addition to bathing in thermal waters and undergoing therapeutic mud treatments, sanatorium guests would engage in physical exercise and stick to a nutritious diet.

Claudine Doury is a Paris-based photographer. She received the Leica Oscar Barnack award in 1999, the World Press in 2000 and the Prix Niepce for her entire work in 2004. Her first monograph, Peuples de Sibérie, was published in 1999. Since then she has published Artek, un été en Crimée (2004), Loulan Beauty (2007) and Sasha (2011).

Michal Solarski is an award-winning, London-based photographer whose work focuses on migration and memory. His work has been widely exhibited and published in numerous publications including the Guardian, Time, GQ and Vanity Fair among others. After finishing his masters in politics in Poland, Solarski moved to London to study at The London College of Communication where he received his second masters in documentary photography.

Egor Rogalev is an architectural and documentary photographer based in St Petersburg He is particularly interested in the Russian and Ukrainian suburbs where the simultaneous process of modernisation and decay is taking place. His work examines post-Soviet reality as a quintessential fragment of the larger pattern of modernity and tries to confront western stereotypes as well as the self-exotising visions based on them.

Olya Ivanova is a documentary photographer from Moscow with a fascination with the Russian village. Her work has been featured in a varity of publications including the Guardian, Monocle, the Financial Times, the Daily Telegraph and Vice and exhibited around the world in galleries in Belgium, France, the UK, the US, Italy and Thailand. She is a graduate of the Institute of Contemporary Art in Moscow and has a BA in Russian literature.

Dmitry Lookianov is an emerging talent on the Russian photographic scene. A graduate of the Moscow Rodchenko School of Photography and Multimedia, his series Instant Tomorrow examines issues related to globalisation from the perspective of the Moscow suburbs and high-rise buildings. For his most recent series, DKdance, Lookianov spent two years documenting what remains of the 18 Soviet Palaces of Culture in central Russia.

Berlin-based René Fietzek is a freelance photographer whose work has been published in numerous magazines including Vogue Germany and Neon. Aside from fashion photography, he has travelled extensively to countries such as Lebanon and Ethiopia to take photographs for NGOs. He is a graduate of visual communication in Hamburg and before that, theatre, film and media in Vienna. 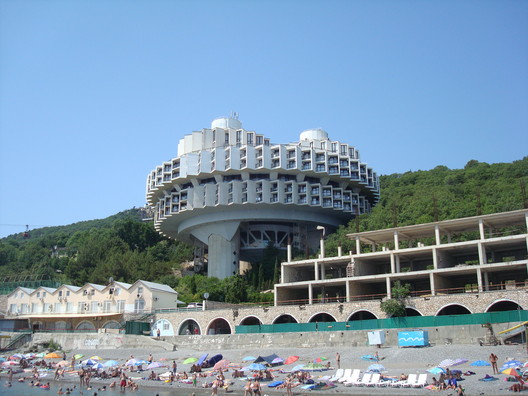