An interactive info graphic published by Bloomberg last month, which scanned 2014 U.S. Census Bureau information from more than 3.5 million households, shows how married professionals are pairing up. Whether people are marrying others in the same field (like artists tend to do), or outside their profession, (as metal fabricators, secretaries and administrative assistants do), Bloomberg finds that falling in love may have more to do with work proximity than destiny.

Here’s how architects, and other related professionals match up:

ARCHITECTS
While architects do have a tendency to marry within the profession, the findings show that male architects marry female elementary and middle school teachers most frequently. They also marry other female designers, secretaries, managers, and male retail salespersons. Female architects in the census data marry male architects and female office administrators.

DESIGNERS
Designers, like architects, tend to marry one another. Female designers have a strong tendency to marry male managers and female lawyers. Male designers marry female and male secretaries and female teachers.

ARTISTS & RELATED WORKERS
Artists continue the trend of those in design-related professions, and, according to the data, marry one another. Female designers also marry male managers. Male artists tend to marry male counselors and female elementary school teachers and female secretaries.

To see how other careers paired up, check out Bloomberg’s interactive chart, here. 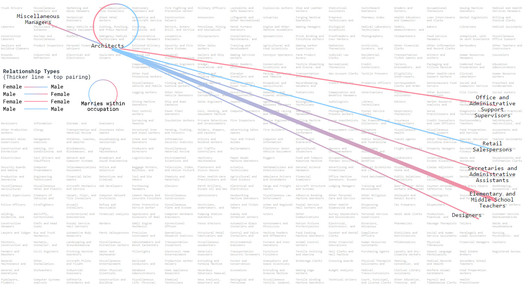