Save
Exhibition: The English Cathedral Photographed by Peter Marlow
Share
Or
Copy

Peter Marlow’s photographs depicting all 42 of the cathedrals of the Church of England are to be exhibited inside The Chapel of Christ the Servant at Coventry Cathedral. This is the first time that the work has been displayed in one of the spaces featured in the series, and the first time the project has been exhibited outside of London. The display is a continuation of Coventry Cathedral’s tradition of, and commitment to, exhibiting work by contemporary British artists. 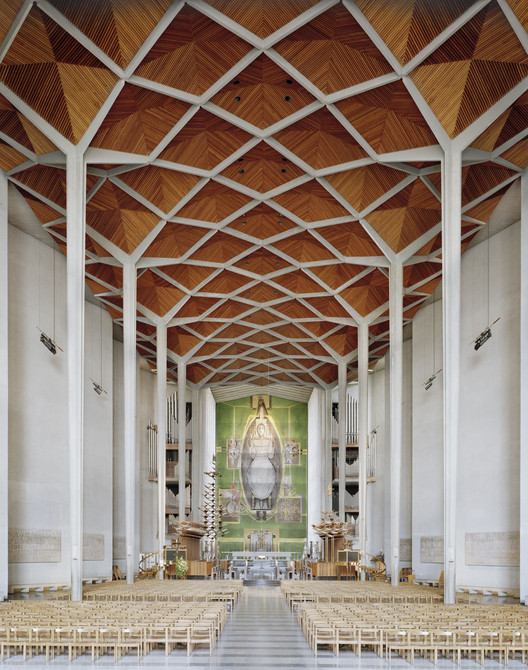 In 2008, Magnum photographer Marlow was commissioned by Royal Mail, on the occasion of the 300th anniversary of the completion of St Paul’s Cathedral, to photograph six cathedrals. The resulting images of Lichfield, Belfast, Gloucester, St David's, Westminster, and St Magnus in Orkney were issued as a set of six commemorative stamps and a miniature sheet. Once the commission was complete, however, Marlow was inspired to continue the project and in the following four years shot all 42 of the cathedrals of the Church of England. This endeavour can be viewed as a contemporary update to tradition of church photography in England, particularly the work of Frederick Evans and Edwin Smith. Marlow’s photographic typology of England’s Anglican cathedrals was published in a monograph by Merrell in 2012.

Marlow developed the strategy of shooting a majority of the cathedrals from the same position: looking east towards the altar as the natural light of dawn broke through the main window. Each shoot was devoid of artificial lighting creating a representation of each cathedral removed from the modern age. This viewpoint and lighting adds depth to the visual experience of the building, and the discipline of this strict approach allowed the power of the spaces to unfold in the dark. Each cathedral was shot on large format film, bringing into sharp relief the splendour of the architecture, regardless of the style.

Peter Marlow (b. 1952, Kenilworth, England) embarked on his professional photojournalistic career in 1975. He joined Magnum Photos in 1980, became a full member in 1986, and held the post of President of the agency for five years. His major projects have been concerned with aspects of contemporary British life and 1993 he published Liverpool - Looking out to Sea (Jonathan Cape), the culmination of a six-year project photographing the city. In recent years, Marlow has worked more extensively in colour and concentrated on his exploration of the physical and personal landscape. He continues to work on his own projects but also commissioned assignments.

Exhibitions include Point of Interest, London at Night and The English Cathedral at The Wapping Project Bankside, Magnum Contact Sheets (Magnum Agency London, and touring), No Such Thing as Society - Photography in Britain 1967-1987 from the British Council and Arts Council Collection, at Hayward Gallery which toured to Centre Pompidou, Paris, amongst other international venues. His work is in numerous collections including the The Art’s Council of Great Britain, Qatar Museum’s Authority, Centre Pompidou, Harry Ransom Centre, Texas, Museum of New Zealand, Wellington, Archive of Birmingham City Library, and the Fuji Art Museum, Tokyo.