COBE has been announced as winner of an international competition to masterplan Christiansholm island (also known as Paper Island) in Copenhagen’s inner harbor. COBE's plan calls to replace the artificial island's existing warehouses with new "Copenhagen Halls" that are topped with housing and commercial space, and anchored by "informal, public functions," such as event, gallery and swimming halls. All will be connected by a public promenade the surrounds the island.

“Our vision for the island’s future is to create a place that celebrates the city’s culture and the Copenhagen way of life. It was important for us that Christiansholm also in future will be a first class example of Copenhagen’s generous urban living that can attract tourists and visitors at the same time has a strong local presence,” says Dan Stubbergaard, owner and creative director at COBE.

From the architects: The 29,000-square-meter artificial Island in the heart of Copenhagen’s inner harbor front, and also the home of COBE’s own studio, has a very prominent location right next to the Opera House and the Royal Danish Playhouse. Despite the prime location, Christiansholm is the last undeveloped quay along Copenhagen’s inner waterfront.

The winning proposal builds on the provisional urban life that is already on the island and proposes to replace the existing old warehouses with new ones containing informal, public functions such as an event hall, a gallery hall, and a new swimming hall. Housing and commercial use will be placed on top of the halls, which encircles a green and intimate courtyard. The whole island will be flanked by a public promenade.

An important driver in ensuring that Christianholm becomes a cultural destination for all Copenhageners is the Municipality’s decision to build a new swimming facility on the island.

Christiansholm, or the Paper Island as it is colloquially known, has for decades been occupied by the Danish press. In 2013, the Procurement Association of the Danish Press left the island after having used it for newspaper storage for more than 50 years.

In the few years that have passed since Christiansholm was opened to the public it has become an attraction for Copenhageners, visitors and tourists alike. The island has been inhabited by the creative industry and public functions such as the science center Experimentarium City and Copenhagen Street Food that together attract more than 350,000 visitors annually.

“COBE has been working with architecture in Copenhagen for the last decade, and Christians- holm is a particularly important place for us, having our studio on the island. With its central location and significant neighbors Christiansholm is a place that very much puts us under an obligation. We are so proud to have won this competition and can’t wait to get started on the further development of the masterplan in collaboration with CPH City & Port Development,” says Dan Stubbergaard.

”We know COBE as a professional collaborator from the development of Nordhavn among other things. With the winning proposal we have taken a big step forward in the development of Christi- ansholm, which is the crown jewel of the inner harbour with its central location right across from the Royal Danish Playhouse. The winning project is a strong and visionary proposal for a new Copenhagen neighbourhood with the Municipality’s new swimming facility, urban life, housing and a unifying waterfront boardwalk,” says CEO of CPH City & Port Development, Jens Kramer Mikkelsen.

In the coming months COBE will further develop the winning proposal for the masterplan in collaboration with CPH City & Port Development, the City of Copenhagen and CØ p/s who will be responsible for the future development of Christiansholm. 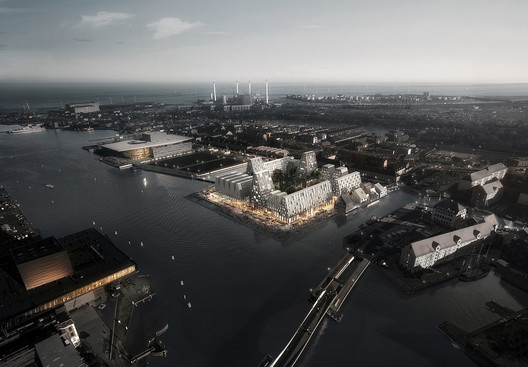