Save
To Think In Actual Space, With Actual Materials: An Interview with Siiri Vallner of Kavakava Architects
Share
Or
Copy

Estonian contemporary architecture is diverse in nature. Here, one can find the spark and freshness of Danish- and Dutch-influenced architecture as well as the tradition-carrying conservatism of Nordic Modernism. A third trend that can be highlighted in contemporary Estonian architecture is a context-sensitive approach to built environment, in which particular emphasis is placed upon the historical, social, as well as spatial contexts. Siiri Vallner’s works may be classified into the latter of these three groups. The buildings she has designed do not number many, but by way of their spatial ideas and solutions they have strongly influenced and enriched Estonia’s architectural culture.

Siiri Vallner is currently sharing her office Kavakava with Indrek Peil, another relatively young Estonian architect. Vallner has received several awards over the last few years. In 2013, together with Indrek Peil, Katrin Koov, and interior architect Hannes Praks, she was awarded the National Culture Award for their architectural solution for the University of Tartu’s Narva College in Narva, Estonia. She was likewise one of three female architects to be given special international recognition at the “arcVision Prize – Women in Architecture” competition in Italy (2013). I spoke with Vallner about both her work and her projects. 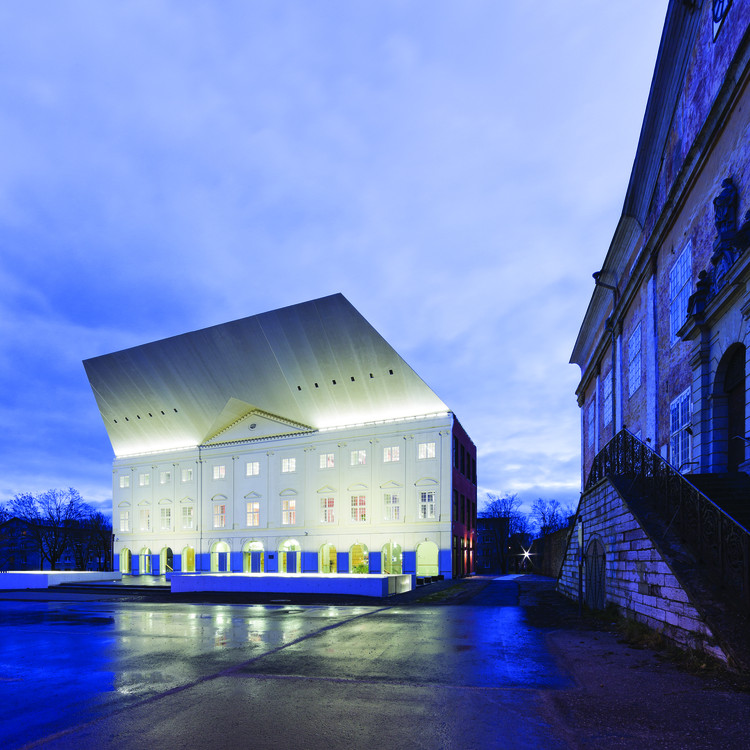 Architecture as a Discipline

Carl-Dag Lige: In the catalog that was published on the occasion of your 2008 Young Architect Award (catalog by the Union of Estonian Architects, 2010) is a quote by Indrek Peil, in which he says: “For nearly the last ten years, Siiri has known very precisely what she wants to achieve in architecture,” and then highlights your conceptual approach – the way that you start from a “clean slate” with every project. Presuming that you agree with the claims he made then, what does starting from a “clean slate” constitute? What does it mean to have a conceptual approach to architecture?

Siiri Vallner: Every project starts with finding the right questions, and only then do the spatial answers come. This question-phase is very important and shouldn’t be missed, even though sometimes there’s the temptation to simply do something quickly on the basis of earlier experience.

CDL: Could you explain a little what those “right questions” entail? Do they concern the future user of a space and its purpose; the social, historical, and urban-spatial context? Or are the questions rather connected to the methodological side of architectural work; to how you and your colleagues approach a specific project?

SV: Something like that, yes. Every project has its own range of topics that are worth focusing upon. If you don’t find that range, then you can certainly make nice-looking solutions later, but the outcome will still remain mediocre.

SV: Architecture should organize an environment and give it meaning; emotional content.

SV: Architects are trained to think very generally and in exceptional detail simultaneously. Creativity and rationality are seen as opposites, but an architect must be able to conjoin them into a single idea. Since people like to live together densely, someone has to organize it in purely practical terms. At the same time, we all have a need somewhere for a deeper dimension. If we didn’t have that need, then good rules would suffice, too, and we could get by without architects.

SV: Kipnis’ classification is nice and clear; essentially, he translates Vitruvius’ famous firmitas, utilitas, venustas into modern-day language. Those three parts are indivisible in practice. Looking at our work, we’ve leaned towards the third point, but that doesn’t mean we treat the first two as inferior in any way.

CDL: In the case of the Estonian Museum of Occupations (completed 2003) in Tallinn, both the spatial user’s direct experience and his or her attitude towards history are important; additionally, the architects’ conscious use of contrast with the urban-spatial context has been highlighted about the building. It was one of your first realized works, and to me, it appears that several processes you’ve since developed further began with it. What did the building teach you most as a young architect?

SV: We contrasted with the context mainly because it wouldn’t be functional to spread the museum out across several floors, and so the structure is single-storied. In any other case, we would have made a proper corner-building. We didn’t want the architecture to illustrate the museum’s content directly, but rather for it to ground the themes of suffering and hatred. A topic in several of our first projects was the conjoining of architecture and natural phenomena. The initial idea for the museum was to project shadows of the trees growing in the inner courtyard onto the glass walls, so that the flickering of the leaves would make the building appear alive. If I learned anything, then it was that nature is not a building material and working with it demands more time for experimentation than ordinary construction enables you to have.

CDL: An endeavor to direct people’s sensual experience appears to hold an important place in your works. For example, the actual character of the Vallimäe Staircase in Rakvere (completed 2005) surfaces only when you step onto it; when you experience it with your own body. To what extent do you pay attention to the conscious direction of human emotions?

SV: I wouldn’t like to control human emotions or experiences entirely, but some possible directions should be opened up. You’ve got to be delicate with it. I personally feel stressed quite easily when space is too controlled or unambiguous.

CDL: As an architect, does fine-tuning need to be done somehow separately? Is additional consideration needed in order for our sensual experience of some space to not merely be a one-time, quickly-exhausted instance; a superficial emotion; but instead to also create deeper meaning? If so, then would you be able to explain that a little?

SV: It’s important to progress from the two-dimensional picture-world. To think in actual space and with actual materials. In my opinion, that’s actually the substance of an architect’s work; time spent on it is never wasted. Everything that’s left over can be called accessory.

CDL: It’s easy to incite emotion using superficial effects, but to what extent do you believe that space is also capable of conveying deeper values to the user; of guiding human intellect?

SV: I myself experience it every day, so I believe it. I don’t wish to make the topic mysterious in any way. People have the need to give their life meaning, and an environment must support them in that.

CDL: As an architect, what can you do so that the spatial user discovers the surrounding world, but also discovers something new about him- or herself?

SV: One shouldn’t force the user to take a passive role in space – an extreme example might be a supermarket, where your trajectory and desirable behavior are fine-tuned according to sales goals. I’m of the opinion that oftentimes, you don’t really need to do all that much. Any kind of excessive heaping of design or overdesigning isn’t to your benefit, in any case.

CDL: Among your projects, what kinds of projects (or else individual spatial fragments) do you deem a success in terms of you having managed to fully interweave spatial emotion and a deeper significance?

SV: The architect and the user probably view that completely differently. For me personally, it’s been more interesting to follow the outcomes of quick and brief projects. Take for example the Lift 11 installation “Pier,” the Rakvere Staircase, or the design for the Kumu Art Museum’s exhibition “Fashion and the Cold War." The briefer projects have been more like experiments in a 1:1 scale, where you immediately see the result and they always maintain some amount of coincidence and spontaneity. It’s easier to observe those projects from the side, too. Long projects that last for years – you lose the distance necessary for an observer’s gaze with them.

CDL: Lately, there’s been a lot of discussion in Estonia about rethinking both our more recent and more distant history, and about the need to re-interpret it. In the case of the University of Tartu’s Narva College, there’s been buzz over not only its spatial concept, but also how the structure interprets local history on so many levels. How would you yourself describe the relationship between architecture and history in respect to the Narva College building?

SV: In our competition entry’s letter of explanation, we wrote that the solution should memorialize both the city’s destruction and its re-construction. This positive aspect that looks towards the future is important to me as an architect. The message of today’s historians is that it’s possible for more than one story to exist at once. That’s certainly the case in architecture.

Carl-Dag Lige (1982) is an architecture critic and historian, a member of the Estonian Society of Art Historians and Curators. He has been a producer, co-curator and moderator of various architecture events and works currently as a Curator at the Museum of Estonian Architecture in Tallinn.

This interview first appeared in Estonian in the publication ERAMU & korter (now known as IDEE) in Summer 2013, and was shared with ArchDaily by the author. It was translated by Adam Cullen.

For more information about Siiri Vallner and Kavakava Architects, see their website here.