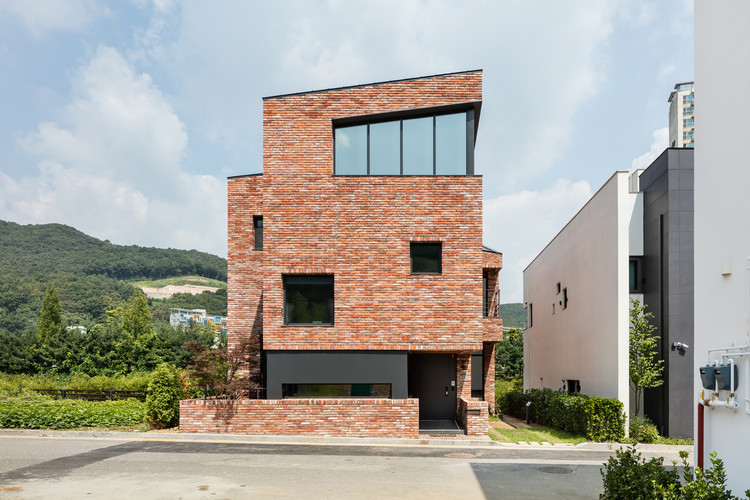 Text description provided by the architects. The project plan made up of 7 different layers—to be more accurate, the whole plan is composed of 11 levels— connect different lifestyles. These layers often overlap each other while creating a bridge between the gaps of family individuals. They are sometimes divided, withdrawing the individuals within their inner space.

The contrast between the exterior and interior design is accentuated by the roughly textured facade with a simple form, uniting various layers of the interior. Satisfying both opposing style preferences from different family members, the exterior design turned out to be a comfortable brick house providing a relaxing environment versus the modern interior neatly composed of contemporary forms, the house becomes an harmonious space embracing diverse tastes of each family members.

The detached housing area in Pangyo—a new town near the Seoul—is allocated into similar rectangular sites. The most well-known efficient way of planning these kinds of sites is placing a rectangular mass at one side while leaving the open space on the other side. However, our plan was using the void spaces as the exterior space that appeared by the misalignment between two masses. Although the exterior space physically became smaller, the psychological space experience was able to expand by the interaction of the void spaces between the rough brick solids and interior space.

The tall stairway is the first identification space when entering the L house. This stairway space plays an important role as the common area to communicate different interior spaces and situations that are piled up in a limited area. The stairway mediates each layers of lifestyles and energetically moves around the house without borders like the movement of one of the family members, the cute puppy. Along the stairway, there are two children's room, a master room, an attic and a rooftop linked by the skip floor that is half step above.

To avoid the stairway space being isolated, multiple windows are placed on the east wall, which is the west side of the void space. The small windows improve the lighting and protect privacy by blocking the view towards the interior space.

The same design vocabulary is used for the inner side of the stairway so that the space would be able to exchange light and bring an opened view. The opened skylight view provided on the high ceiling window symbolizes the center of the house. The rich atmosphere with various light, air, and sight provides the stairway a semi-outdoor space so that each family members can experience their own entrance gates.

The living room on the ground floor is planned with a wide glass skin on the north facade to embrace the local nature with the Woonjung river and Cheonggye Mountain. "We come home much earlier than before to see this scenery." says the clients with a happy face.

The clients have initially asked the architects before planning to see the north scenery in the living room. Contrary to the widely opened living room, the library on the semi-basement is a space for silence and moderation. The library is floored by darkly colored wood, using exposed concrete walls that are connected the sunken garden, which is  to one of the in between void space with the toemaru—the traditional Korean intermediate space—where people feel good to take a cup of tea.

The different floor level in the skip floor continues to the inside of the children's room, dividing the function of the room into a relaxation versus work space. The son’s room is created by the two masses meeting on the top of each other, exposing two different sloped roofs which provides an uniqueness to the overall space.

The master bedroom was designed as a compact space following the client’s demand. More than half of area is planned as a walk-in-closet allowing a huge storage space. The master bedroom is designed with a higher ceiling space with a corner window so that the space doesn’t feel too tight.

The top area of the front and rear mass is composed with a rooftop and attic, where the family can enjoy the north side of the nature view from the rooftop and the sunlight from the south attic. In order to maximize the effectiveness of these spaces, the slopes of the roof is designed higher on the outwards of the central stairway, which consequently created a reverse-pitched-roof. The slopes of the reverse-pitched-roof prevents external contamination by blocking the rainwater flowing outwards from the two masses, and collecting them into the in-between void space. 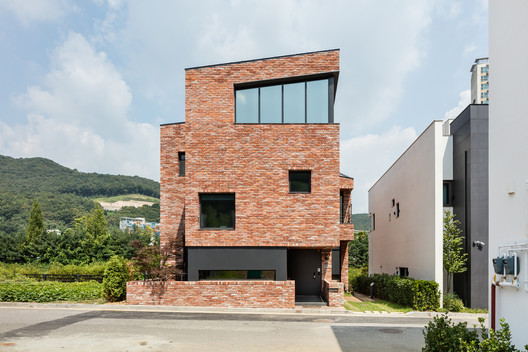