Save
People, Place, Purpose: How Mecanoo's Architecture Aspires to More than Style
Share
Or
Copy

In "People, Place, Purpose," the latest monograph of her Delft-based firm Mecanoo, Francine Houben explores the unique work which has enabled the firm to take their place among the world-renowned pantheon of Dutch architects. In the following excerpt from the book, Herbert Wright presents an introduction to the monograph and the themes running through Mecanoo's work in general, breaking down an architecture that is defined not by style or ego but by three overarching responsibilities - and perhaps a dash of color.

On a computer screen, architects can move virtual walls around with just a few clicks, but surely only superheroes can shift an actual wall around physically with their bare hands? So it was quite a surprise, while standing in the Saint Mary of the Angels Chapel in Rotterdam, to see Francine Houben, founding partner of Mecanoo, do precisely that. After some gentle fussing and tidying around the lectern and candles where the priest conducts ceremonies, she walks to a wall, and puts her hands firmly to it. It recedes to let in the sound of tree branches swaying in the wind passing through the cemetery outside. 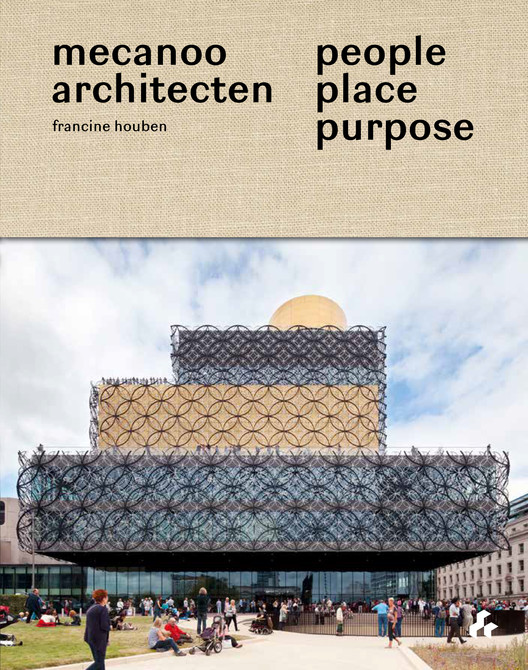 I should explain what makes Mecanoo, a fantastically successful global design business, quite different in terms of philosophy and style from its competitors, where its roots and context lie, how its focus has shifted, and what it all means. But first, let me explain that wall. The chapel is one of the practice’s most beautiful and surprising designs. A continuous organically curving metal wall completely encompasses the interior, but two sections of it are wide, full-height doors, each hinged on steel supports. Houben was pushing open one of these doors. She was demonstrating how practical it was to fulfil the ceremonial needs. A coffin comes through a door on one side, stops, and a little later, it leaves through the other side. It was designed, she said, “as a symbol that life continues”.

This book’s title lists three concerns informing Mecanoo design. As we shall see, since Mecanoo’s establishment in 1984, the sheer variety of People, Place and Purpose that the portfolio has addressed as projects have spread around the world is astonishing. In the chapel, we can easily identify them. Its Purpose is not just as a stage-house for the dead, it is also as a religious building, and with the doors shut, the space internalises and becomes meditative.

The Place happens to be in Rotterdam’s multiethnic Crooswijk area, and to reflect its People, words from the Requiem In Paradisum mass are written around the wall in different languages, silver words
on blue.

It’s not about style

The blue is a particular vibrant shade that has become Mecanoo’s hallmark. It pops up in many Mecanoo buildings, from the revolutionary library of the Technical University of Delft, completed in 1997, to the contemporary Library of Birmingham, where it has a way-finding role. “Mecanoo Blue” was what they called the exhibition that won the 4a Bienal Internacional de Arquitetura Award in São Paulo in 1999. The colour floods Mecanoo’s corporate branding.

It’s actually a stage paint, dating back to Mecanoo’s very first theatre project in the mid-90s. An avant-garde theatre group, De Trust, needed to adapt the space of a former Lutheran church in Amsterdam. “I got influenced by stage design, the use of colours and artificial light”, Houben recalls.

Mecanoo is not the only practice to make colour their own—think of Richard Rogers and his playtime-coloured ventilation funnels, for example. But extraordinarily, this blue is almost the only single visual stylistic element that runs like a thread through the portfolio, and even then, not in all buildings, but in many of the most significant. Mecanoo have never had a house style, and they never wanted to have one. In 2000 Houben formulated “Ten Statements”, a set of considerations (namely: land value, nature, sustainability, urban planning, cross-disciplinary co-operation, the client, style, spatial composition, intuition and emotion) which define Mecanoo’s ethos and culture. In the one called “Handwriting and language”, Houben says: “Discussion about style is interesting but not ultimately essential.” Maybe so, but because it makes things easy to visualise, critics like to worry away at that word “style”. I once pressed her to describe the portfolio in a few words. “It’s tactile, it’s multidisciplinary, its human”, she said. These are not visual words but they nevertheless paint an accurate picture.

Before leaving the Saint Mary of the Angels Chapel, a bizarre comparison popped into my head. Looking at the wavy golden roof floating over the metallic exterior surface of the wall, I was reminded of the brashly iconic Asahi Beer Hall, Tokyo, by Philippe Starck, completed in 1989, with its kitsch golden flame floating over a reflective polished granite volume. By coincidence, Houben took a drive-by photograph of it in August 2002. She was on one of several urban drives around the world which she took while researching mobility, the theme of the first International Architectural Biennale Rotterdam which she curated in 2003. In terms of People, Place and Purpose, the two buildings could not be more different, but they nevertheless share a pure freedom of form that once seen is unforgettable.

People, Place, Purpose: How Mecanoo's Architecture Aspires to More than Style
Buy from
amazon.com
Share
Or
Copy
About this author