There are few challenges within architecture as distinctive as designing religious or spiritual spaces. While these projects share the functional challenges of more everyday architecture, the expectation of a deeply-felt spiritual experience adds an extra challenge to these designs that make them unlike most other commissions. How can architects approach such a challenge? In this excerpt from Sherin Wing's forthcoming book "Designing Sacred Spaces," Michael Rotondi of RoTo Architecture discusses how his approach to life informs his approach to designing religious architecture.

Mr. Rotondi’s outlook is guided by an unending curiosity: “I want to know everything about everything before I die and it’s not possible. So I see any project that comes along as a potential research project as well as whatever the practical things I have to solve. So I’m always trying to think about the things I think about often and in different ways. It would be nice if I could see the world as if for the first time like children do, where you have no basis for knowing something because it’s the first time you’ve seen it, it’s the first time you’ve experienced it. And so you see it with great wonder. When you see things over and over again, you see them like an expert.

You come to conclusions that aren’t too dissimilar from the conclusions you came to before. So you’re not enchanted by the world anymore.” He offers an example: “If I were shining a flashlight on a sphere, a big sphere, I’d see only that part that the light hits. I don’t see the rest of it. That’s the way I imagine everything in the world is. So there have to be other people standing around with their own flashlights telling you what they say, and then when they tell you see, you’re able to construct it into a greater, holistic vision.

“So that’s why I keep reading,” he says. “That’s why I’m always, I rarely talk on a plane, but sometimes I do if I’m sitting next to a nano-technologist or something like that. Which I actually did coming from China recently, a nano-biotechnologist. That was interesting!”

That reading, Mr. Rotondi explains, is directly related to spiritual practice: “I came back to spiritual practice but not religious practice. I started working with, reading a lot about any society that had figured out how to integrate matters of the mind and matters of the heart because in our world they’re really separated out which is really Cartesian. I don’t think it so much of Descartes’ doing, well it was, but it was also he had to separate the body from the mind so that the church didn’t burn him at the cross. The soul is in the body, you know, the mind was age of reason, the church was okay with that.

“I did a good job at pretending to be angry at the world even though I was, my life wasn’t a crisis but a shift back into the youth. But my default is back to the inherent goodness in everything and if anything transgresses, it almost wasn’t their fault. It’s about limits. And the better I know limits, the less I complain about other people’s limits. For example, if you complain about people who are too shy or overweight or too talkative, it’s a projection because you’re talking about yourself.”

"Work is prayer. If you’re doing the right thing and you really like what you’re doing. I don’t have any hobbies. People say what do you do and I say I’m working. There’s a mystic master Eckhart who wrote volumes about the passion for creation. And work is creative therefore work is prayer. And you do it in a way that you’re focused in such an intense manner that it begins to dissolve time. The Shakers were like that. The extraordinary things they made, it was made that way because they saw it as prayer. You get the least amount of material, the greatest proportions, elegant systems, beautiful shapes. They’re not making units to be moved. The endgame isn’t selling to Google."

Designing Sacred Spaces will be released on November 30th. 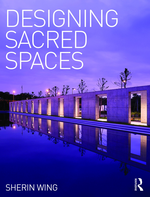