From the publisher. In order to avoid participation in architecture and urban design becoming merely a politically required token of democratic involvement - a kind of fake participation that does not actually engage the participants in any meaningful way - architects, planners, and designers need to commit themselves and relinquish control, as Jeremy Till claims in an interview with us entitled "Distributing Power." With this new issue of MONU on the topic of "Participatory Urbanism" we aim to find out and reassess to what extent individual citizens really can and should become proactive in the production and development of cities and in the shaping of neighborhoods, and where the limits of such Participatory Urbanism really lie.

However, giving up control and power can be tricky, as planning experts are usually sceptical of participation procedures and tend to consider such procedures an interference in their competences. Instead, they tend to reject the possibility of enrichment of urbanist practice through multilayered urbanistic concepts, as Moana Heussler, Peter Jenni, and Stefan Kurath argue in their contribution "From a Spatial Society to a Spatial Culture." This kind of disbelief, according to Damon Rich, has spawned legions of "public participation consultants" that offer governments in the US a "bulletproof process" that no amount of citizen disruption is able to stop, as he told us in an interview entitled "Participation as a Battlefield."

A certain doubt with regard to the functioning and effectiveness of participation procedures is to a certain extent understandable, of course, as such processes easily become too complicated and impossible to manage. Bringing more people to the table certainly does not make things easier, as so many people are involved in architectural and urban projects already, even without citizens' participation. That the process might get complicated and even dangerous when people participate in projects is quite impressively demonstrated by Marina Abramovic in her art performance "Rhythm 0", in which she tests the limits of the relationship between performer and audience and tries to find out how far the public is willing to go, learning that: "if you leave it up to the audience, they might kill you."

In order to not kill anybody and to organize participatory design processes in a satisfying way, Serafina Amoroso - in her piece "Participatory Urbanism: New Learning-scapes in Contemporary Cities" - points out that architects and urban designers need the knowledge of the user as expert-citizen through which the process becomes a two-way street and expansive. After all, knowledge is not just 'content' to be transmitted and learnt, but demands a deeper understanding in terms of experience and empathy. Only then can public participation in architecture and urbanism lead to scenarios in which both professionals and non-professionals alike are enabled to become active producers, working inside and in between the existing spaces of their host cities as Cathy Smith states in her article "Participants or Consumers? The 'Do It Yourself' Construction of the Twenty-First Century City". And only then projects can flourish that create a sense of social inclusion and authenticity that cannot be dismissed as little more than 'hipster economics'.

MONU is an English-language, biannual magazine on urbanism that focuses on the city in a broader sense, including its politics, economy, geography, ecology, its social aspects, as well as its physical structure and architecture. Therefore architecture is one of many fields covered by the magazine - fields which are all brought together under the catch-all term “urbanism”. MONU is edited in the city of Rotterdam, the Netherlands. Continuous publication began in June 2004. MONU is an independent, non-conformist, niche publication that collects critical articles, images, concepts, and urban theories from architects, urbanists and theorists from around the world on a given topic.

MONU examines topics that are important to the future of our cities and urban regions from a variety of perspectives and provides a platform for comparative analysis. The different viewpoints, contexts and methods of analysis allow for an exploration of various topics in a rich fashion. The combination of the writings and projects created within different cultures and from different professional backgrounds generates new insights in the complex phenomena connected to cities. MONU functions as a platform for the exchange of ideas and thus constitutes a collective intelligence on urbanism.

MONU was founded in 2004 and is directed by editor in chief Bernd Upmeyer together with his Rotterdam based Bureau of Architecture, Research, and Design (BOARD). 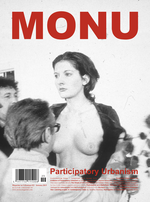