Maka-Sojka Architects have won a competition to design a new facility for Polish public broadcasting corporation TVP in Warsaw. Driven by their desire to communicate transparency in journalism, and centralize the many programs involved in television, the project consolidates many different factors, much like journalism itself. Read more about the TVP Information Agency building after the break.

The form and composition of the project are simple – a tall vertical tower added to a main, lower horizontal building. With the use of these powerful geometries, the surrounding chaos is given order and context, according to the architects. The project is defined programmatically, with the newsroom in the horizontal building and the panoramic studio at the top of the vertical tower. As the editorial process brings many different people and personalities together, the creation of a workspace that supported collaboration and communication was crucial for the office. To achieve this, different zones were dedicated, with enclaves for privacy in each zone.

Throughout the design process, effort was taken to generate a plan that would facilitate and stimulate the process of creating television material. The goal was not only to illustrate the creative process of journalism, but also to express it in its many stages. With this goal in mind, the project implements an open model of observation, allowing the public to witness both the final result and the stages leading up to it through a glazed facade. Transparency within the building is also encouraged through the use of a nave for the production spaces, with offices located at the top floor. Line of sight is maintained through the two spaces, generating more opportunities for ideas to cross-pollinate and re-invent themselves. 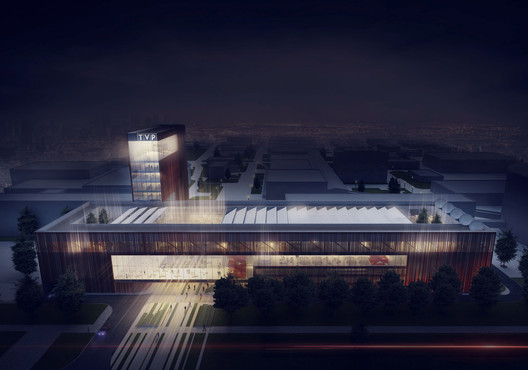