Save
The Versatility of Corian, from Countertops to Railings
Share
Or
Copy

Developed as an alternative to stone and laminate counter surfaces, the product was first available commercially at the National Association of Home Builder’s meeting in Houston, Texas, in 1971. Initially used for kitchen counters, bathroom vanities and molded shower surfaces, Corian’s applications have expanded to include an almost limitless range, including staircases, furniture, flooring, and jewelry. Recently, both for its durability and ease of cleaning, the product has become a favorite for exterior facades, as demonstrated by the Rue des Poissonniers Housing by MAAST and Atelier King Kong's Seeko'o Hotel. Corian’s malleability allows it to be fixed in almost any shape, it is superior to woods and plastics in strength, and is non-porous. Once available only in shades of white, the product is now produced in over a 100 colors, including metallics and a series of heterogenous, stone-like finishes.

The product’s unique characteristics made it an obvious choice for the designer of the Dickens Apartment, Ammar Eloueini of AEDS, and for Marc Fornes / THEVERYMANY™, who worked with Eloueini to produce a biomorphic Corian screen that doubles as a railing in a Paris apartment. 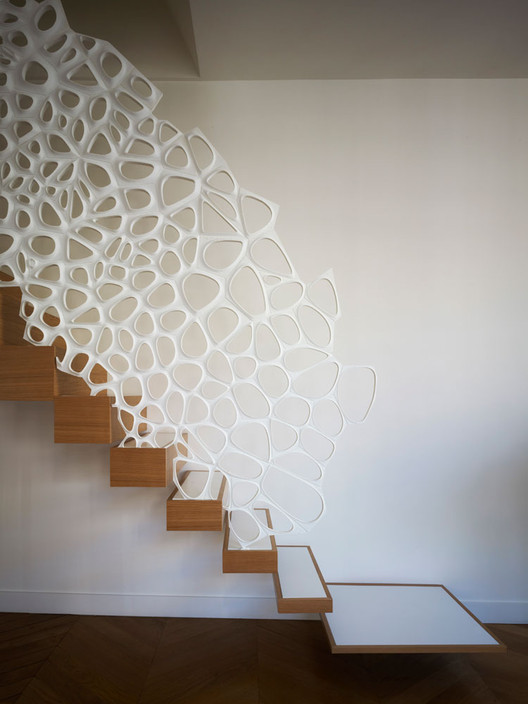 Fornes calls working with Corian “straightforward,” using a solid piece of material that was robotically milled from both sides to achieve the tight angles of the design. According to Fornes, the project benefited from the fact that Corian is "a forgiving material, which can easily be sanded to eliminate flaws or joints." However, he adds that “heft” was the biggest challenge of working with Corian, in a project where the design objective was “to create a screen that appears light, maintaining the airiness that characterizes the rest of the apartment.” Ingenuity was required to disguise the weightiness of the material.

For stability, the screen is connected to the wall at the top of the staircase, but "as it descends and becomes two-sided, variation in the thickness, number and size of its cell geometry transform the screen from full and thick to light and porous," says Fornes. These subtle details are a testament to the strength of the material and the variations made possible by computer-aided milling technologies. The screen’s surface is unfinished, because, Fornes says, “Corian is already soft and sensual to the touch.”

Correction update: An earlier version of this article neglected to mention the involvement of Ammar Eloueini and AEDS, who designed the apartment and worked with Marc Fornes / THEVERYMANY™ on the design of the Corian handrail. ArchDaily apologizes for this oversight.