Gehry Partners, alongside Townscape Partners, has unveiled plans to redefine the "gateway" to California's Sunset Strip. A cluster of five distinct, Gehry-esque structures, the mixed-use proposal is one of several design alternatives that have been proposed by Townscape for the site. If built, it would include two residential buildings, featuring a mix of rental and for-sale apartments, along with retail, entertainment programs, and public gathering spaces.

From the developers: The Gehry plan addresses specific design needs for the 8150 Sunset Boulevard site, including the desirability of creating welcoming pedestrian spaces between the buildings, keeping the Sunset Boulevard street front height low—to relate in scale to other buildings in the area—and optimizing views of the city from the two residential structures.

This approach also eliminates the traditional view of such developments as residential towers on a podium. Instead, the Gehry design establishes five distinctive structures, each with its own character and all united at a common plaza accessible from the street level, with parking offered entirely below grade. The overall scale allows the buildings to relate to the immediate architectural context, such as the Chateau Marmont, Granville Towers, and Sunset Tower, as well as the other buildings in the Hollywood hillside, while adding new design elements in the area.

The three-story retail building that sits at street level, along Sunset Boulevard, will have glulam mullions supporting a glass curtain wall, and will feature a marquee element—further reinforcing the site’s role as a gateway at the pedestrian scale. This street-front building will also promote an accessible pedestrian experience and invites people into the site’s interior plaza. The plaza, also a centralized retail destination, will feature an open-air public space that can also be used for specially programmed events. The center of the plaza holds the “jewel” in the heart of the project, a structure whose facade is made of stone cylinders and cones and which will house programmable space and retail.

The eastern, 11-story residential building, along Crescent Heights Boulevard, is simpler in its design vocabulary compared to other parts of the project, to better fit the scale of the neighboring buildings. Its sculptural form creates a sense of movement, and gestures to the intersection of Crescent Heights and Sunset Boulevards. The western, 15-story residential building is specifically scaled to create a visual and architectural relationship with the Chateau Marmont. The glazed façade has some transparency, making the overall form appear lighter, while also reflecting the surroundings and further enhancing its sculptural quality.

Landscaping is an integral part of Gehry’s overall architectural design, both at the ground level central plaza and the various terraces in the building design. Pedestrians are drawn into the ground level plaza from between building elements at the intersections of Sunset Boulevard, Havenhurst Drive and Crescent Heights Boulevard, and the plaza will feature hard and soft landscaping as part of the pedestrian experience. The buildings feature stepping terraces at both ends of Sunset Boulevard, mediating the scale at these intersections at the street level. All terraces will feature landscaping and trees visible from both east and west vantage points along Sunset. Additional landscape elements climb into the upper parts of the project, indicating amenity and terraces spaces for residents as well as stitching the project into the Hollywood hillside, and topped with a landscaped roof. 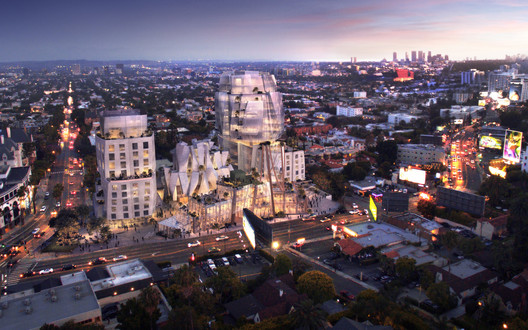