EM2N has won first prize in an international competition to design the new Museum of Natural History Basel and the State Archives Basel-City. Selected over 22 other proposals, the winning scheme "Zasamane" will unite both institutions within a single "storehouse" that will "combine knowledge about nature and culture" of the Swiss city. The elongated building will take shape with a subtle stagger that responds to the neighboring railway line and increases in density as it approaches Vogesenplatz. A slender tower will anchor the building, offering an "urban symbol" for both institutions. 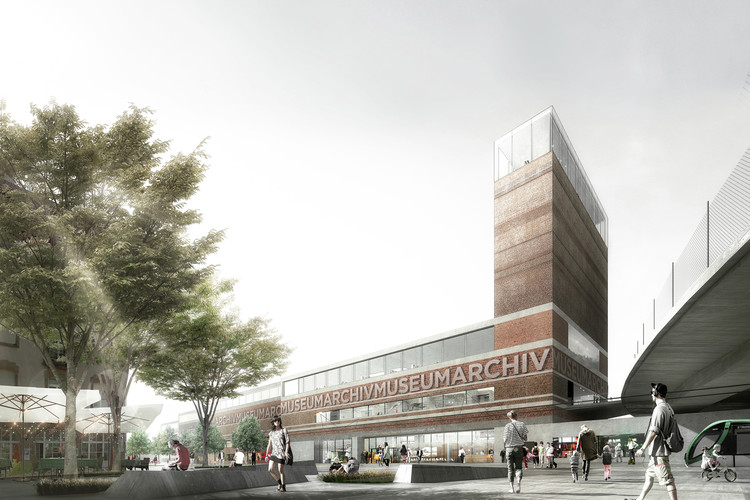 From the architects: Bringing together the State Archives and the Museum of Natural History at a single loca- tion creates a unique storehouse of information that combines knowledge about nature and culture. The elongated site along the railway line is occupied by an additive series of building volumes that increased in density towards Vogesenplatz and ends with a slender tower at the Luzernerringbrücke. The tower is an urban symbol that stands for both institutions and anchors the knowledge storehouse beside the tracks, on Vogesenplatz and in the city as a whole.

The principle of joining and layering forms the general urban and architectural leitmotif. The subtle staggering of the building volume is given emphasis externally by the very physical quality of the materials used for the walls. The plinth, entrance area and the State Archives on the top floor are characterized by exposed concrete and glass. The other horizontal surfaces consist of areas of brickwork layered in different shades of colour to create an image of sediment-like strips.

A generously dimensioned entrance hall strengthens the joint presence of both institutions. In visual terms this foyer, a spatial vessel open to the outside, brings outdoor space into the hall. The question about the individual identities of the institutions is of central importance: both functions are clearly perceptible and identifiable by the unambiguous allocation of spaces within the overall system. Each institution has a symbol-like entrance hall as an address. Together with the shared entrance hall, the tower hall of the State Archives and the staircase hall of the Museum of Natural History form a triad that is harmoniously balanced in terms of space and content.

The State Archives extends along the entire length of the building in the form of a glazed top floor that offers a view of the city. The circulation system running through the 18-meter-high hall in the tower links the plan counter on the ground floor with the reading room area at roof level, both spatially and visually. By means of large openings to the outside and the inside this representative interface space connects the State Archives with the functions of the museum and with the new arrivals area at the Luzernerringbrücke.

The rooms of the museum are on the floors below. The idea of the museum as a store- house of knowledge is given a concrete physical and architectural structure by the concept of a wide-spanning, twin-story shelf. As well as offering generous spatial qualities this structure also ensures a high level of flexibility and adaptability for the long-term operation of the museum. Two internal staircases allow the museum areas to be linked in different ways and suggest a number of possible tours. The staircases themselves are like spatial slices made through the various layers, which expose the museum’s varied program and enable visitors to experience it. They also allow a variety of visual relationships and proximities between the two interlocking institutions and a connection to the life of the city.

Construction is expected to begin in 2018. 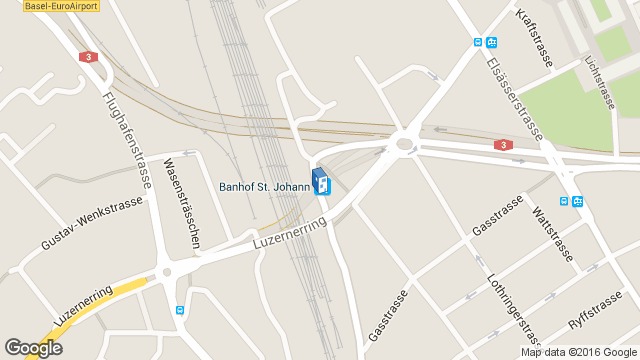 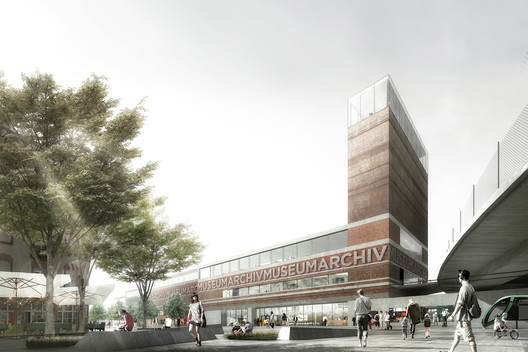