Propaganda, n. The systematic dissemination of information, esp. in a biased or misleading way, in order to promote a political cause or point of view. Also: information disseminated in this way; the means or media by which such ideas are disseminated.

This heavy pause in the profession, unsettling as it feels, is just the open mouth of the river, beckoning. As the doctor said, “Du calme, du calme.” You will turn, head up, and pass through the stations ahead. This is affirmation of redefinition is the essence of Conrad’s Heart of Darkness. The recession is why I am drawn to it.

Given current conditions, must architecture, the discipline and profession, embark on a journey of redefinition itself? Though it may not be on the same level as GM’s restructuring, broader economic forces beyond the profession’s control compel it to thoughtfully consider the course forward. On a private level, this is perhaps the best time to define or redefine yourself as an architect or architect-to-be. This process of self-discovery is how you own it.

Definitions from external sources will prove inadequate. Mies said, “Architecture is the will of an epoch translated into space.” Amidst the current dangers of late-capitalism this leaves me searching for something more. It conjures darker tendencies of nationalism that might have made more sense during the Cold War. Whose will and by what force or mechanisms? What would such spaces look like now?

For a more contemporary take, they might look like those designed by Bjarke Ingels, who says, “Pragmatic utopian architecture takes on the creation of socially, economically and environmentally perfect places as a practical objective.” While this sounds compelling through a megaphone, it brings to mind the ideology-laden development campaigns of totalitarian states. I could imagine the Dear Leader saying this. The realization of utopian conditions raises troubling Orwellian questions. Plus, like nostalgia, the quest for utopia could also be regarded as a form of illness. I much prefer the title of his recent comic monograph, Yes is More. Though equally ambivalent, it is cheerfully optimistic and conjures an atmosphere of play that seems so essential these days.

Then, there is this. Since I was looking at the OED, I thought I might as well punch in “architecture” and see what comes out. Here it is:

Architecture, n. 1. The art or science of building or constructing edifices of any kind for human use. Regarded in this wide application, architecture is divided into civil, ecclesiastical, naval, military, which deal respectively with houses and other buildings (such as bridges) of ordinary utility, churches, ships, fortification. But architecture is sometimes regarded solely as a fine art.

That is more depressing than the recent year’s average Architectural Billings Index. Suspecting the Wikipedia version would not improve my mood, I stopped.

That echo you hear comes from the hollowness propaganda leaves behind. Ultimately, the only definitions that can speak to you will be your own. Internal definitions propel Mr. Ingels. They shaped Mies’ ambition.

On a business and cultural level it is crucial to reassess definitions and methods that may have contributed to a structural vulnerability (think banking industry and Wall Street). Do firms require a macro-economic growth rate somewhere above 7% or in the double-digits to be profitable? Do you have to be in China for the next decade to make it? Do you have to relentlessly dump labor into competitions to get ahead?

When recessions hit, architecture is one of the first industries to be gutted and one of the last to recover—it leads and it trails. And, by the way, this is not a good way to lead. Interestingly enough, the fact that it can lead a recession makes it an asset for other businesses trying to strategize damage control and future recovery. In a sick, circular logic, this helps architects because they depend on the rest of the economy to adjust and recover before they themselves can. Is there a way out of this cycle?

While architecture is doing an excellent job at being an LEI (Leading Economic Indicator), what is it doing to not repeat the same patterns recession after recession? Does it sufficiently learn from other business cultures that adapt and respond with greater flexibility in down times? Could architecture learn something from Zappos, for example? You can actually hire those dudes to come and revamp your culture. Or, would this simply not work for architecture firms? 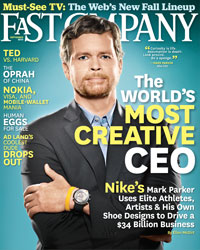 Or, how about this? For one million dollars you can have Tony Robbins’ cell phone number and for one year you can call him any time, day or night, for a pep talk or to discuss strategies for success. I would love to work for the firm that has this number. If his fee puts this out of reach you at least get a head start by scanning publications like Fast Company. To my knowledge, architecture does not have a dedicated business publication that could compare.

So, here is more propaganda. The recession may be viewed as a complicated and fraught opportunity to work on new definitions—and definitions from new people—to potentially strengthen structural and cultural weaknesses within the profession for the next time around. The strong currents keeping us in place should not stop us from turning and heading up river.

The Indicator, a weekly column focusing on the culture, business and economics of architecture, is written by Guy Horton. The opinions expressed in the indicator are Guy Horton’s alone and do not represent those of arch daily and it’s affiliates. Based in Los Angeles, he is a frequent contributor to Architectural Record and other publications.