Recent Harvard graduate, Nicolas Fayad, was awarded the Boston Society of Architects’ James Templeton Kelley Prize, an honor recognizing the most successful graduating project. Fayad’s “Brittle”, a School of Arts, is an exploration of responsive and adaptive form. Fayad’s programmatic elements have been organized and molded in response to the changing typography of Chongqing, China – making the design quite flexible as it can easily adapt to any change of land within the city.

More about the awarded design after the break.

With the topography as the constant parameter, different variations were analyzed to find “hybrid components” where program and surface would be compatible with the context.  Using this strategy, simple stacked boxes respond to the angle of topography on which they sit.  With the first box responding to the land, the successive boxes work from that datum and gradually rotate.   “This produced a gradual angular deformation that in turn provoked the creation of cracks as a response to the tension created by the system,” explained Fayad. 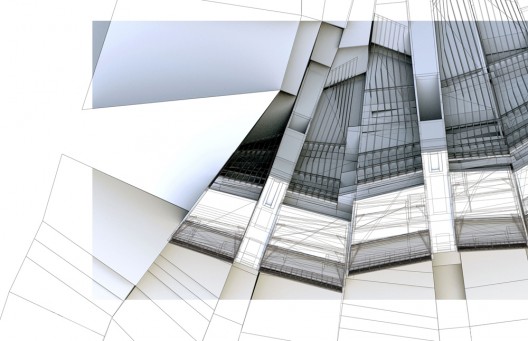 The cracks became communal spaces and later in the project, “they developed their own logic in terms of spatial organization enhancing the taxonomic scheme of the project.”

Responding to the ground condition has interesting results and creates dynamic relationships sectionally, as the building’s divided fragments are cohesively joined through the system from which they were formed.  “The sectional relationship presents a rhythm of multiple perspectives, roughly synchronized with the movements of buildings propelled by tension and gravity,” explained Fayad.