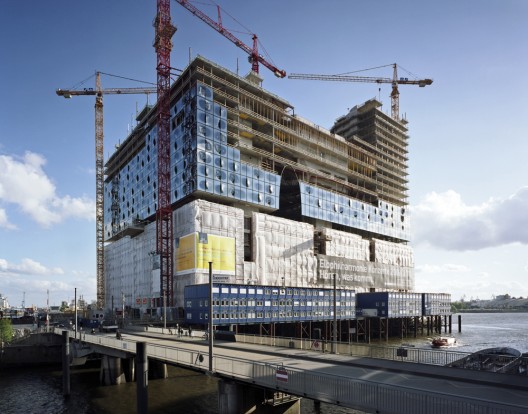 Herzog and de Meuron’s Elbe Philharmonic Concert Hall in Germany is in the midst of construction, and we just received some photos from the firm. The 17th century factory, which the new hall rests upon, will maintain its traditional identity while housing new programmatic activities. The Grand Hall seems to float above the distinctive factory, clothed in a tent-like glass facade. The highly articulated facade is designed in different sections to provide appropriate sun protection depending upon function and orientation. Once complete in 2012, the building will include a 250 room five-star hotel, and 47 apartments, in addition to a philharmonic hall of 2,150-seats and a chamber music hall of 550 seats.

See early renderings as well as recent construction photos after the break.

Images courtesy of Herzog and de Mueron or Oliver Heissner as noted.