Here are some amazing projects from all over the world you may have missed last week. Also, our latest section: AD Classics! Check them all after the break.

The Mint / FJMT The Mint Project is the transformation of one of Sydney’s oldest and most precious historical sites on Macquarie Street into a new meaningful public place formed and characterised as much by the carefully inserted contemporary buildings as the conserved and adapted heritage structures. It is a project that seeks to set a new and important benchmark for (read more…)

AD Classics: Seagram Building / Mies van der Rohe Located in the heart of New York City, the Seagram Building designed by Mies van der Rohe epitomizes elegance and the principles of modernism. The 38-story building on Park Avenue was Mies’ first attempt at tall office building construction. Mies’ solution set a standard for the modern skyscraper. The building became a monumental continuity of bronze and dark glass climbing up 515 feet to the top of the tower, juxtaposing the large granite surface of the plaza below (read more…) 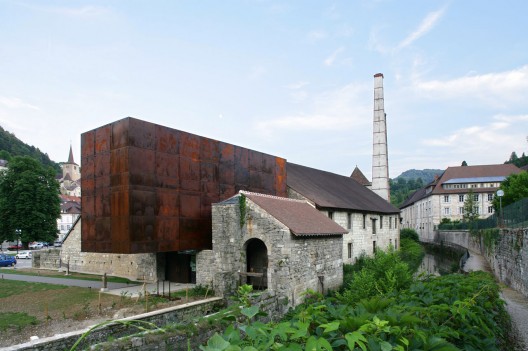 Salt Museum / Malcotti Roussey Architectes + Thierry Gheza Closed since 1962, the salt works in Salins-les-Bain have been an important productive site since the middle ages right in the centre of the French city in the Franche Comté. When the competition for restoration of the salt works was announced in 2006, the city authorities had already set the goal of transforming it into a monument to the history of local production with the aim of restoring its original central importance, not only symbolically but in the city’s urban layout (read more…)

Alila Villas Uluwatu / WOHA This hotel and villa development is designed as an ecologically sustainable development. Located on the dry savannah landscape of the Bukit Peninsular on the dramatic southern cliffs of the Indonesian island of Bali, it comprises of a 50 suite hotel with 35 residential villas. The resort opens its doors on 1 June 2009 (read more…)

Kolelinio / Martin Angelov In January, Angelov’s provocative idea for a second circulation lane, which allowed bicycles to travel across steel wires, sparked quite a debate. Angelov has branched off this initial idea to form a new concept for urban transportation. Kolelinio takes the wire system found in the Kolelinia experiment to a new level by creating a seemingly part ski-lift part roller coaster line that will zip people around the city (read more…)