Save
AD Round Up: Cultural Centers Part III
Share
Or
Copy

It’s amazing how different can five cultural centers look. From USA, China, Denmark and China, here’s our third selection of previously featured Cultural Centers. Check them all after the break.

Prism Gallery / PATTERNS PATTERNS has designed a new three story cultural center for West Hollywood, California. The center, known as Prism, will become a cornerstone of artistic experimentation, carving a new niche for the arts in Southern California. The facade will be the first in the nation to be constructed entirely out of a resin based composite polycarbonate (read more…)

Craig Thomas Discovery and Visitor Center / Bohlin Cywinski Jackson The new Craig Thomas Discovery and Visitor Center is sited between a sagebrush meadow and a riparian forest along the Snake River. Approaching through a grove of spruce, cottonwood and aspen trees, visitors are drawn into a courtyard that provides a calm and intimate place in the vast Wyoming landscape. The proportions of this outdoor space accommodate groups of people for gatherings and orientation (read more…)

Railyards Cultural Centre / 3XN A few weeks ago, we featured a competition won by 3XN to transform the former freight train halls in Aarhus, Denmark into a new and dynamic cultural center. Now we bring you several more images and diagrams about this new cultural hub for scenography, visual arts and literature (read more…)

Korea Center / SAMOO SAMOO Architecture, the New York studio of SAMOO Architects and Engineers based in Seoul, Korea, was awarded first prize in an international competition for the design of The New York Korea Center. Set to begin construction at the end of this year, the 8 story, 33,000 square foot facility will provide space for exhibitions, performances, lectures, and administration (read more…) 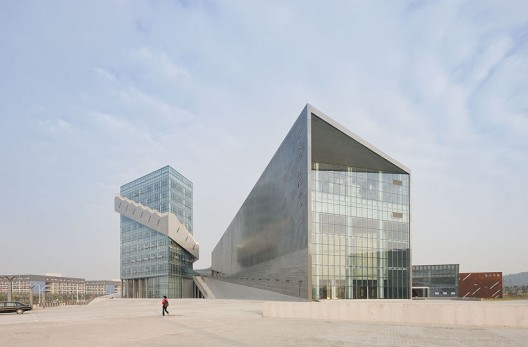 Nanjing Performing Arts Center / Preston Scott Cohen Located centrally in the new Nanjing University Campus in Xianlin, this building aims to offer a singular expression of the dialogue between two opposing paradigmatic forms of symbolic significance: a curving roof that appears to be related to the landscape of the larger campus context, and a tower which acts as a beacon and observation point (read more…)

ArticlesCulturalAD Round Up
Cite: Sebastian Jordana. "AD Round Up: Cultural Centers Part III" 11 May 2010. ArchDaily. Accessed . <https://www.archdaily.com/59711/ad-round-up-cultural-centers-part-iii> ISSN 0719-8884
Save