Nestled into the coastal landscape of Calais on the northern coast of France, Arte Charpentier Architectes have unveiled their design for the Calais Congress Centre, a hub for cultural and social activity in the bustling city. Located along the English Channel, the centre will provide remarkable views of the water and ships entering the city's commercial port. The curvilinear centre will mimic the lush green landscape while echoing the energy of the city with an asymmetrical, ethereal design which includes flexible public space, exhibition halls, meeting rooms, and two hotels all shrouded by an elegant curtain of glass. 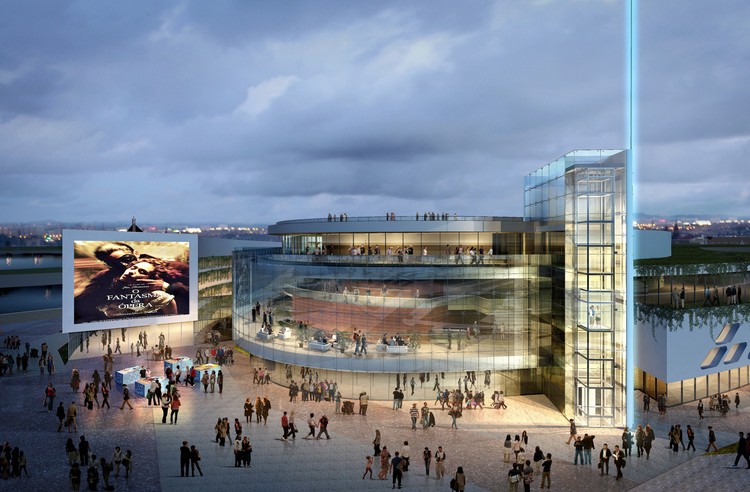 Calais is largely defined by its status as one of Europe's busiest ports, due to the dozens of cruise ships, transport tankers, and large boats that pass through on a daily basis. The project team aimed to incorporate Calais' storied history with its role as a centre of commerce, challenged with a dynamic program and a maximum height requirement of 15 metres within an 18,000 m² site. The team envisioned an organic form that rose from the green landscape, contrasting with the geometric forms of adjacent buildings while reflecting landmarks including Fort Risban, the lighthouse, watchtower, and historic city hall.

Inspired by components of coastal life, the exterior of the centre is reminiscent of nautical design, while the flow of the interior space recalls the gentle motion of ocean waves. Panoramic views of the port, coast, city, and landmarks can be seen from any of the centre's soaring windows, complemented by varied landscaping that punctuates the facade. Design for the centre is anchored firmly in contemporary architecture, a juxtaposition against the historic architecture of the Calais city centre.

From above, the centre melds into the landscape as an extension of the greenery along the Calais waterfront, while a series of stacked rings differentiate the exterior public spaces. The centre will be home to a variety of creative endeavours with capacity to activate both interior spaces and the exterior plaza. Described by the firm as "distinctive by its verticality, its finesse, and its height," the Calais Congress Centre will rise unobtrusively over the waterfront as the city's newest defining structure.

Arte Charpentier Architects is a France-based interdisciplinary design firm with an expertise in cultural and social centres. Find out more about the firm's projects as featured on ArchDaily, here.