REX has shared with us their competition proposal for Calgary’s New Central Library (NCL). Though Snøhetta and DIALOG ultimately won the competition, REX was shortlisted as a finalist with an unconventional scheme that was based on adaptability, serendipity and treating the librarians as curators. By literally stacking the library’s program according to the client’s desired sequence, REX formulated six typological clusters hoisted on top an illuminated plinth.

Check out the complete proposal, after the break. 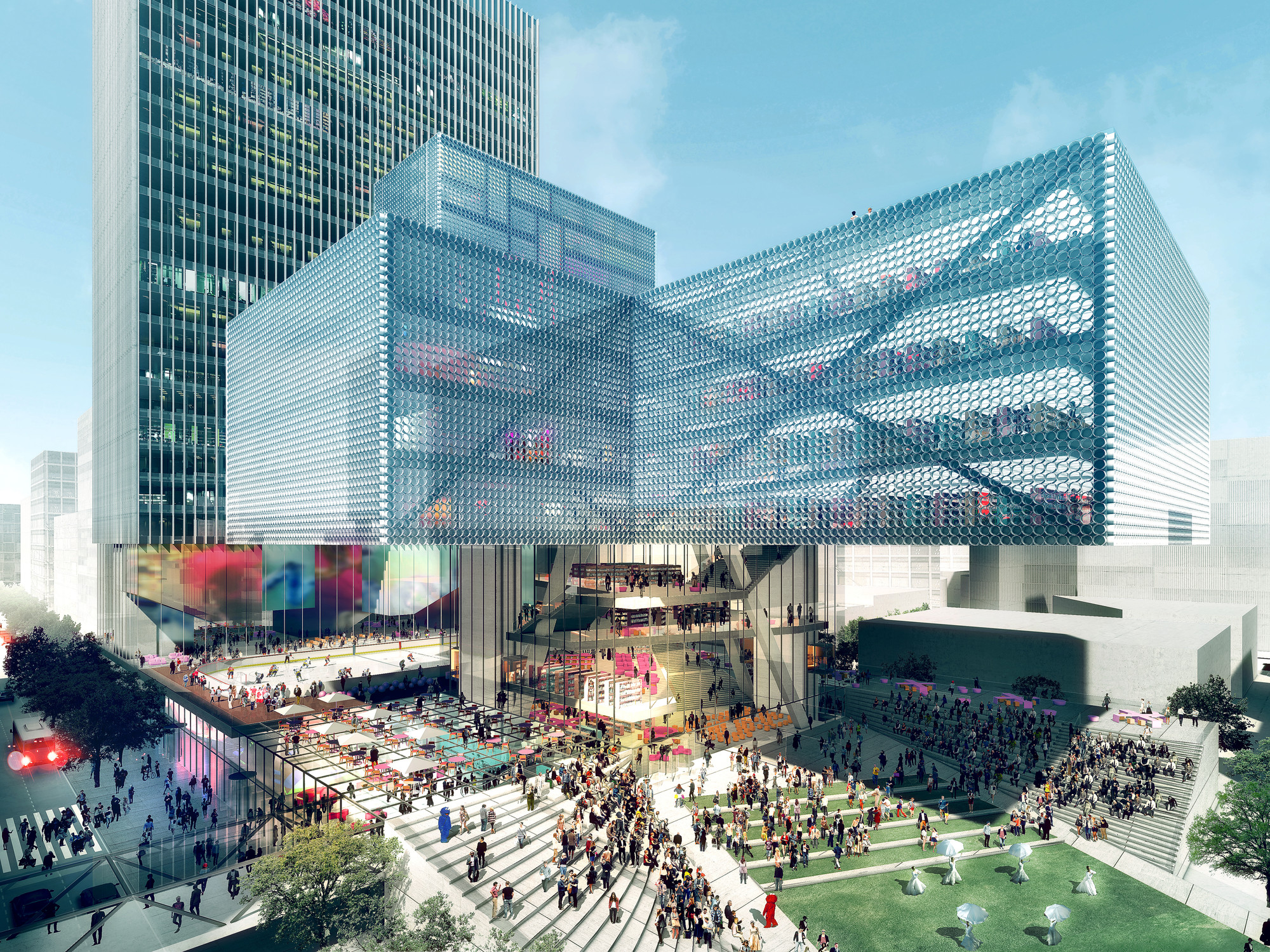 From the architects: As part of its architect selection process for the New Central Library (NCL), CMLC requested the finalist firms create a conceptual model revealing their design approach. The model was to be amalleable strategy, not a fixed proposal, that exhibited each proponent’s vision for the library of the future. Essential mandates were to make the building as adaptable as possible and to integrate it into the neighborhood as an urban catalyst. The ideas incorporated into REX’s malleable strategy stem from our analysis of the NCL’s organizational DNA.

The most publicly accessible functions—Retail Concourse and Public Forum—are shifted to straddle the tracks of Calgary’s Light Rail Transit that bisect the site, thus activating the currently desolate surrounding streets. The Future Expansion space is stacked adjacent to the Main Collection for maximum flexibility: it can provide growth space for the Main Collection or, should the Future Expansion house its own program, immediate adjacency and access to the collection. Building Operations sit at grade for accessibility from the proposed service route. The four sections of the Main Collection—The Center for Community Excellence; Science, Health, and Arts; My Calgary; and Fiction and Literature—occupy individual floors, but their programs are combed and placed in the same zone on each floor to create vertical clarity: there is now a Reading Room, a Books Box, and a Rooms Box. The Staff Work Areas are aligned over the typologically-similar Rooms Box. The Learning Commons slides between the Main Collection and Future Library Expansion to increase its interface with the core library resources.

The final organizational diagram suggests an actual section through a possible building with six typological clusters and a plinth. This diagram translates into a three-dimensional, malleable building strategy: a conceptual armature robust enough to accept significant public and staff input, and major aesthetic adjustment. The agglomeration of clusters need not retain a Cartesian aesthetic. Manifold configurations and aesthetics could satisfy the underlying conceptual armature.

Following are the concepts that underpin our strategy:

Adaptability: Despite an increased need to accommodate change, contemporary library design still relies on an outmoded version of flexibility: one size fits all. The promise of a blank slate upon which any activity can occur has produced sterile, surprisingly inflexible environments, where functions blend confusingly and rooms or individual spaces lack unique character. As their functions multiply and specialize, and operational budgets dwindle, the “blank slate libraries” can rarely afford to accommodate the expansion, evolution, and increased specificity of their offerings. When they can, these alterations come at the expense of other equally vital elements. The result is not freedom, but imprisonment within a sterile box.

We proposed the opposite: a concept that delimits activities, builds in uniqueness on opening day, and provides each unique element with its own forms of flexibility. As described in DNA Sequencing, by combining like-with-like, six typological clusters from NCL’s Functional Program were identified. The cluster strategy enables three significant forms of tailored adaptation.

First, by keeping each cluster autonomous, its architecture can be dedicated to, and equipped for, specific duties far beyond what could be achieved on a generic floor plate. Because each cluster is designed for a unique purpose, the size, flexibility, circulation, palette, structure, and building services of each varies. Importantly, although each typological cluster is architecturally defined vertically, the intended clarity of each Main Collection section is still maintained horizontally.

Second, by keeping each cluster discrete, the possible evolutions of each can be developed on its own terms, without sacrificing the potential of another. Flexibility is thereby highly specific to each vertical cluster’s needs. By example, as the entire Reading Room need not accommodate the floor loads of books nor the air handling specificity of rooms, it can be designed with an underfloor plenum system, allowing reconfiguration and rewiring at any time without capital cost.

Third, during design, each cluster’s architecture can be completely reconceived and the location of one cluster can be switched with another’s, without impacting the credibility or integrity of the design concept. Ultimately, the strategy of delimiting activities—giving each a tailored solution, and arming each with its own specific form of flexibility—provides significant malleability, not just over the building’s life, but also during the design process.

Wayfinding and Serendipity: The traditional library presents the visitor with an infernal matrix of materials, technologies, and “specialists.” It is often a demoralizing process—a trail of tears through alien Dewey Decimal numbers, bifurcated classifications, mysterious floor numbers, and antiquated or redundant categories (should Crime and Punishment be in Literature, Humanities, or Fiction?!).

NCL’s vertical typological organization eases wayfinding while celebrating serendipity. By example, the Books Box is a single vessel of media connected by an interior stair case and perimeter ramps. If, while researching Carl Sagan’s pioneering work on exobiology in Science, Health, and Arts, a patron discovers Sagan was also a novelist, his book Contact could be found two flights up on the Fiction and Literature floor without leaving the Books Box.

In addition, by providing each cluster with a clear typological character, the building itself is the ultimate wayfinding device: each component is a super-sized icon. (“Look Mom! There’s the Reading Room.”)

Librarians as Curators: In an age when information is exploding and readily accessible by all, it is the expert guidance and curatorship of its broad contents that makes the library essential. Libraries’ most vital resource is no longer the media they offer, but the librarians they house. Librarians differentiate the library from all other information sources. NCL’s design must therefore be planned to enhance the librarians’ evolution from managers of materials to mentors and curators who help patrons navigate the information explosion.

Organizing NCL into typological clusters increases the ability of patrons to self-navigate, freeing librarians to focus on their role as intellectual guides (as opposed to operating as “finders”). While specialists will continue to provide expert direction within each functional element, many can be united in a zone of concentrated, interdisciplinary expertise: the Learning Commons.

Located at the heart of NCL, the Learning Commons fosters interdisciplinary synergy, serving as a trading floor for efficient, in-depth information exchange, and as the gateway to the larger offerings of the Main Collection and Teens’ Center surrounding it. It is conceived as a series of stepped plates connecting all four floors of the Main Collection: an energetic hive of patrons, librarians, and technology. The Learning Commons thus consolidates NCL’s cumulative human and technological intelligence. Librarians are physically and spiritually at the project’s heart.

Library as Public Lighthouse: The last several decades have revealed an accelerated erosion of the interior Public Domain, replaced by increasingly sophisticated and entertaining forms of the Private, where one must pay to play. But the essence of the Public is that it is free. In North America, the Library has become the last repository of free, interior public space. Beyond maximizing the Functional Program’s desired relationships, NCL’s vertical organization expands this last free interior public space into a markedly inspirational experience.

Using the slope formed in response to the LRT tunnel, Calgarians are drawn up and through the building on an interiorized public landscape. Along this continuous path from grade to the alpine reading meadow atop the Books Box is the interface between the Library’s many functions—spaces for work, interaction, and play.

The energy of the Entry Core and Learning Commons forms a public lighthouse, radiating a warm and welcoming civic face toward the new East Village precinct. The drama of the experience and the unusually high vantages it offers the public will command a significant position not only within Calgary’s physical landscape, but its mental landscape.

New Central Library as Crossroads: By centering NCL at the nexus of nearly every existing and planned vector in the City and straddling its Entry Core over the LRT, the Library becomes the keystone that bridges downtown with the nascent urban expansion eastward. In this manner, NCL is both an intellectual exchange and a physical crossroads. As if by Providence, the site is located within the precinct of the East Village master plan named “The Crossing”...“X” literally marks the spot.

Urban Stage: For all its resultant programmatic, experiential, and symbolic advantages, NCL’s vertical organization also frees the plinth to form a rare and vibrant amenity, a publicly accessible gateway from one half of the City to the other—an Urban Stage. The four floating arms of NCL act as a fly tower, transforming the stage beneath into a dynamic space for outdoor performances and events.

The centerpieces of the Urban Stage are the accessible lawn and the year-round ice rink. Informed by the slope of the LRT tunnel below, NCL’s front lawn creates a true public event space technically aided by the cantilever of the Books Box above. The Stage’s north side focuses on urban sports, organized around a hockey rink and lit from the Rooms Box after dark. Outdoor recreation space for Yoga in the Village, Sno-Flo Glow, or events for the Hypothermic Half Marathon will animate this space year-round.