COBE has released their competition winning design for a new Volunteer House at the entrance of the Danish Red Cross in central Copenhagen. An extension to the existing headquarters, the new space will serve as a common entrance to the entire facility and offer a public “hang out” atop its pitched, terraced roof. 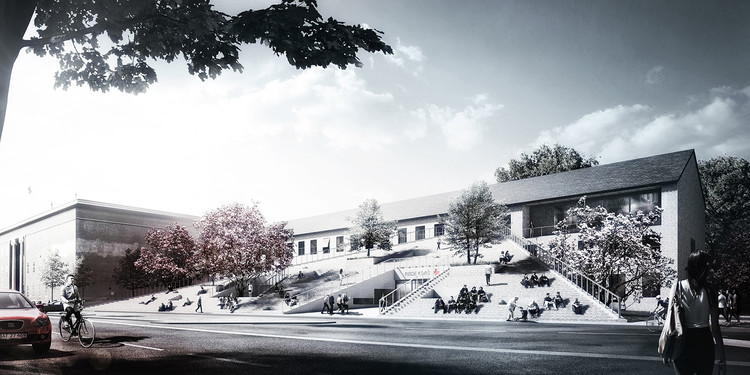 ”The building is shaped as a triangle rising up towards the existing Red Cross headquarters and has a spectacular pitched roof surface with stairs, terraces and greens elements,” says Dan Stubbergaard, Founder and Creative Director at COBE. “The roof will be a distinctive place attracting and inviting people to stop and hang out. A meeting place not only for the current employees and volunteers of the Red Cross – but for all citizens in Copenhagen and beyond.”

As visitors enter, they will be greeted by an exhibition and cafe area. To the left, the house will be flanked by a large staircase leading up to “flexible” conference and exhibition space, which could be used for various actives such as workshops, meetings, exhibitions, events, lectures, film showings and more.

“It has been very important for us that the new Volunteer House relates to and interprets its surroundings. The present Danish Red Cross headquarters is a beautiful 1950’s modernistic building consisting mainly of yellow bricks and a yellow tile roof. In the Volunteer House, this is reflected in a modern mode of expression through the use of yellow brick tiles on the entire roof surface. The color scheme and tactility resembles the yellow bricks, but the overall expression of the façade is radically different. Inside, golden colors are used, accompanied by wooden surfaces and exposed concrete. All these materials that in resemblance with bricks give the user a warm, tactile and vibrant impression,” Stubbergaard adds.

The construction of the Volunteer House is planned to begin in January 2015 and is expected to be completed in early 2016. It will be built with a 25 million DDK donation from the A. P. Møller Foundation.