The problem of homelessness challenges city governments all over the world, one which, despite many attempts by governments to curb the problems that lead to homelessness, does not seem to have a simple solution. What's more, with many countries still deep in the global economic crises, many governments and non-profits struggle to provide an adequate amount of temporary shelter for the homeless population.

But what if we could make temporary accommodation for the homeless pay for itself? And what if we could provide it by leveraging structures that would be built anyway? This is exactly the approach taken by Michal Polacek, Matej Nedorolik and Martin Lee Keniz of Project Gregory, whose design for small roadside accommodation built into an advertising billboard is currently on Kickstarter. 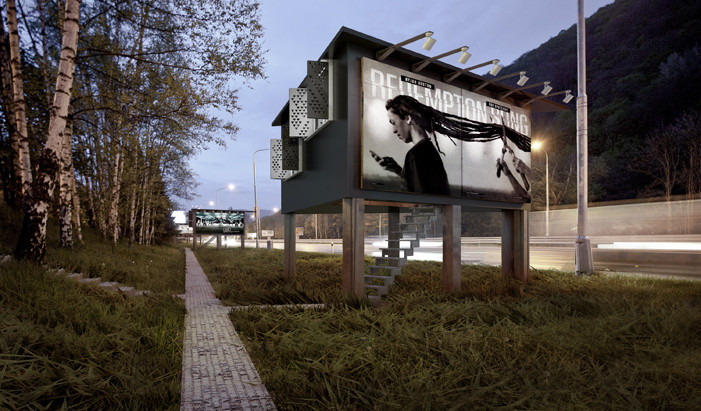 The design, an elevated bedroom and bathroom built into a triangular plan, was based on standard dimensions for a roadside billboard. By imitating these roadside structures, Project Gregory avoids the issues involved in finding land and approval for homeless shelters, and ensures that the idea can spread - by leasing advertising space, proceeds can be raised to fund more shelters. Also, as this form of roadside advertising can be found in countries all over the planet, the idea is one that can easily spread beyond the borders of Slovakia, where Project Gregory's founders are based.

The aim of the current Kickstarter campaign is to get the project over the initial hump, with the goal of raising £41,000 to construct the first prototype and test the idea. You can visit the team's Kickstarter page to help fund their vision, or learn more about Project Gregory at their website.