In 2011, adjkm won an international competition to design the Simon Bolivar Complex for Social Action through Music (CASMSB - Complejo de Acción Social por la Música Simón Bolívar) in Caracas. Now, almost four years later, the Venezuelan practice has released their updated design for the “Caracas Symphony” in preparation for its groundbreaking at the end of this year.

The building is being constructed for the El Sistema project, an internationally distinguished program based on the premise that musical training can create great musicians and completely alter the expected life paths of children born into extremely impoverished circumstance.

Operating along El Sistema values of incurring cultural development as a device to spur social and professional integration, the Caracas Symphony will be located along the northern boundary of Los Caobos Park, complementing existing structures in the Amador Bendayán Boulevard, right at the cultural heart of Caracas. The deeply urban context is celebrated as a social link within a dense cultural program. Thus, the building is prominently bent towards landscape design, and is divided by a horizontal rift devised to create a panoramic view of the Los Caobos greenery. This crack becomes a seam of connection and point of interaction for visitors and users.

The complex will be composed of two distinct parts: the music conservatory and the concert halls. The music conservatory, a grounded compact block, will include orchestral rehearsal rooms, sections and rows. As these spaces are anchored to the ground, they are more private and characteristically intimate. They offer spaces to study and practice, allowing more meaningful connection between the musician and his/her music.

Above the horizontal rift, the concert halls are enfolded in the upper part of the building as a conceptually light, suspended block. Each of the three concert halls receives a unique treatment in order to offer a wide range of acoustic capabilities and respond to the specific needs of various orchestras. The first hall uses a modular strategy to accommodate the largest El Sistema orchestras, with maximum capacity of 400 musicians, a 200-person choir and 1900-seat audience. The second hall offers 1300 seats for visitors, and can accommodate 200 musicians and 400 choir members. The third concert hall, however, is evidently experimental in order to create space for alternative orchestras such as salsa, symphonic rock, and Venezuelan music. Appropriately sized, its maximum capacity sits at 500 seats for visitors. 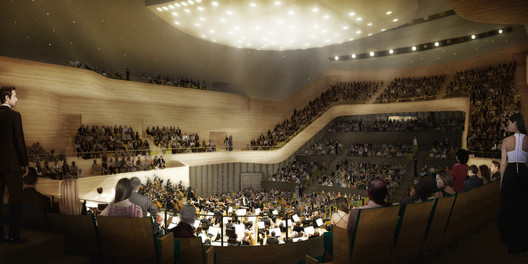