Save
Condemned to be Modern: Inside Mexico’s Pavilion at the Venice Biennale 2014
Presented by:

Mexico’s pavilion at the 2014 Venice Biennale is centered on Octavio Paz’s reflections on the contraposition between tradition and modernity. Echoing the request from Rem Koolhaas that the national pavilions focus on the theme Absorbing Modernity 1914-2014, Paz’s writings establish that “…modernity, for the last one hundred years has been our style. It is the universal style. Wanting to be modern seems like madness, we are condemned to be modern.”

Architects Julio Gaeta and Luby Springall use this reflection as the starting point for their curatorial project, designing the pavilion to show two story paths: one traditional and one modern. This concept is executed through the selection of works emblematic of Mexican modernity juxtaposed with works, events and interviews that influence architecture.

Check out photos from the pavilion along with the official text from the curators after the break. 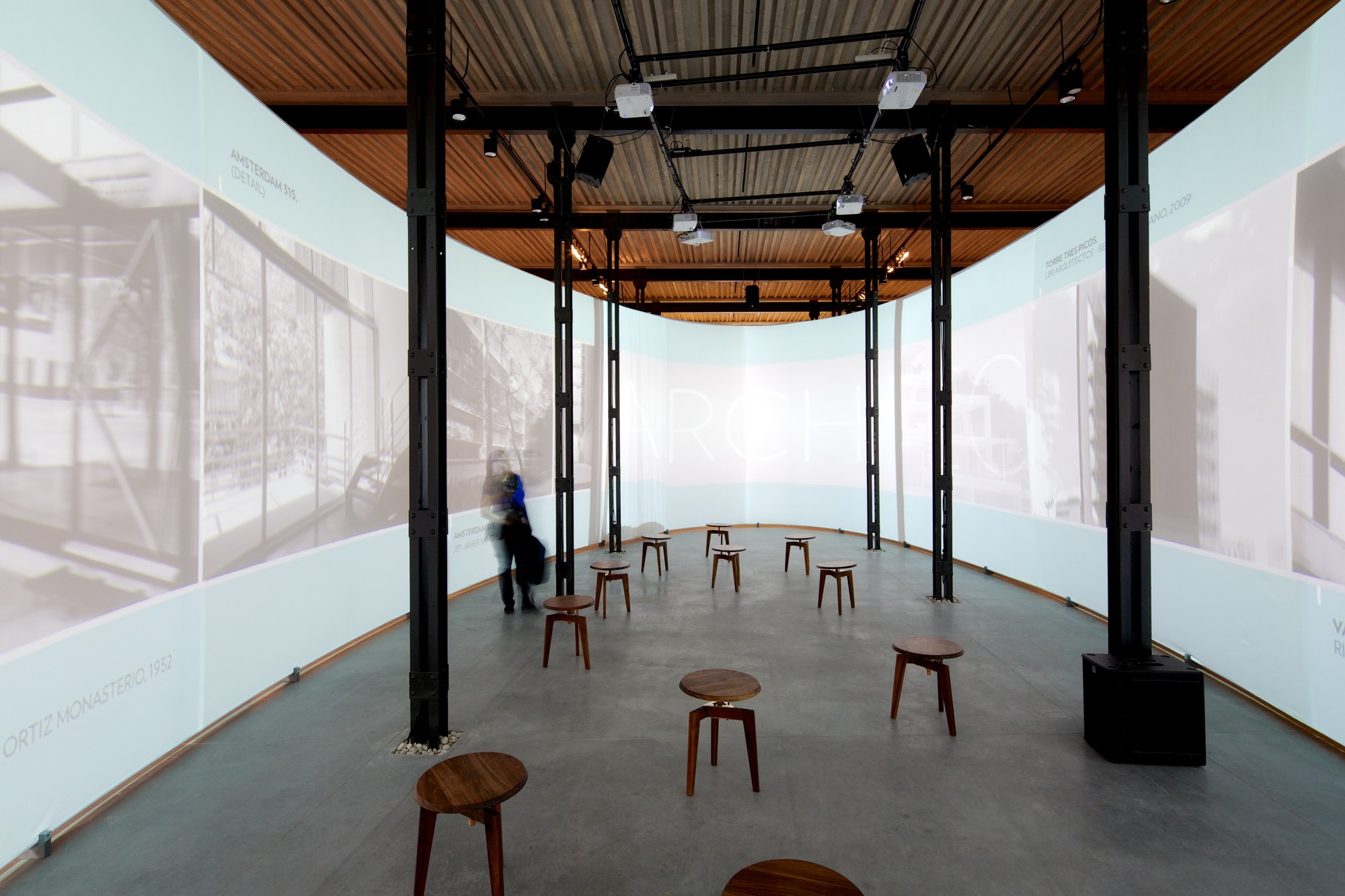 From the Official Catalog of 14th International Architecture Exhibition: "...condemned to be modern"

"[...] modernity, for the last one hundred years has been our style. It is the universal style. Wanting to be modern seems like madness, we are condemned to be modern," Octavio Paz.

Referring to the period of the Mexican Revolution, Octavio Paz wrote, “The search for modernity drove us to discover our ancientness, the hidden fate of a nation. Unexpected history lesson: between tradition and modernity there is a bridge.”
This process, in which tradition and modernity have been altered, combined, and set at counterpoint, yielded, and continues to yield, the rich production and the complex discourse that has characterized Mexican architecture over the last century.

The pavilion “…condemned to be modern” intends to deploy two types of discourses, one traditional and the other contemporary.

The first is determined by eight themed panels, eight doors that recover topics central to the deployment of the process of modernity in Mexico; the other a luminous ellipse in which more than one hundred works, interviews, and historical events related to architecture are presented through high impact audiovisuals.

The eight panels work as doors through which we can access, read, and analyze emblematic and paradigmatic works that illustrate the process of Mexican modernization under the headings of “The Search for a Path,” “Social Concerns,” “Dialogues with the Masters,” “Building the City on a Grand Scale,” “Materials and Techniques,” “Integrating the Arts,” “International Modernity,” and “Building Community.”

The luminous ellipse is a projection room in which architectural works, interviews, and audiovisual media of sociohistorical events that participated in Mexican modernity are presented.

The size of these images (eight images of 3.5 x 4.5 meters) will generate different emotions as the viewer perceives architecture, complemented by audio, on a large scale.

It contains active, constantly shifting imagery that shows events and the passing of time; it constitutes a landscape that merges the icons of architectural modernity with social anecdotes and historical events, revealing the complexity of the figures, scenarios, and components that constitute Mexico.