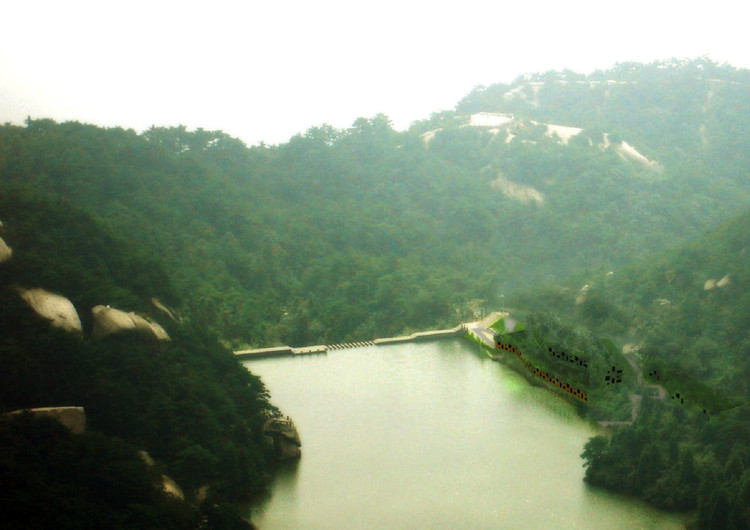 It is located in Anhui province, in one of the 5 sacred Taoist mountain of china, beautiful and very famous that’s why the government want to develop as well as possible the touristic infrastructure so as to preserve this natural landscape.

To define the new relation between this building and the surrounding nature the project has been inspired by the typical Chinese painting. In this kind of painting, the building and the nature are not 2 separated system stick together, they are represented as an integrated whole where the architecture is not the main focusing point of the composition. It reproduces in a way the natural form and follows the general movement of the landscape.

For this specific situation it reproduce this philosophy of vanishing. The strategy is to consider the building as the continuity of the existing topography so as to reduce his impact on the land. The building is bended by following the natural movement and defines as set of different face that minimizes its size.

It is divided in two levels according to the slope, from the mountain to the river. The basement plan is connected to the natural element, on one side with the rock by the creation of 2 caves and in the other side, organized in length all along the water.

On the roof plan only one part of the building is visible, the central one, while the other part are completely recovered by the slope.

We define two relations with the view for the façade composition to provide different experiences of the landscape feeling.

The materiality is quite simple only bamboo and concrete will be used in a rough way, because for this project the construction process has a big impact on the final design due to the difficulty of access. Indeed the site is quite far from the first village and you can only use this small track, by foot to go there. That’s the reason why we choose the ciment as the only material, because it’s easy to carry in small unit using people or animals. And we can also combine it with the rubbles of the old building, and use the water of the lake to compose the concrete.