Ricardo Bofill Taller de Arquitectura and Gerber Architekten have tied for first place in a competition to design a cultural and civic Islamic center in Saudi Arabia, beating several well known international competitors, including Zaha Hadid Architects and gmp Architekten. The ultimate winner will be announced at a later date.

Ricardo Bofill's proposal for the center, which is meant to foster the research, study and transmission of the Qur'an, takes geometric inspiration from traditional Islamic cities:

"The first Islamic city had a circular plan, with all spaces being enclosed in the circle representing the elemental symbol of unity and the ultimate source of diversity in creation. This traditional city, or rather the idea of this city, serves as the base and the essence for the creation of the Islamic modern city. Such a background has led us to choose a circular concept as the main representational shape of the project for The Noble Qur'an Oasis. This unique civic and cultural landmark, with its sleek, minimalist design, is a symbolic container where the Islamic science and culture will be displayed."

Read the architect's description of their design, after the break. 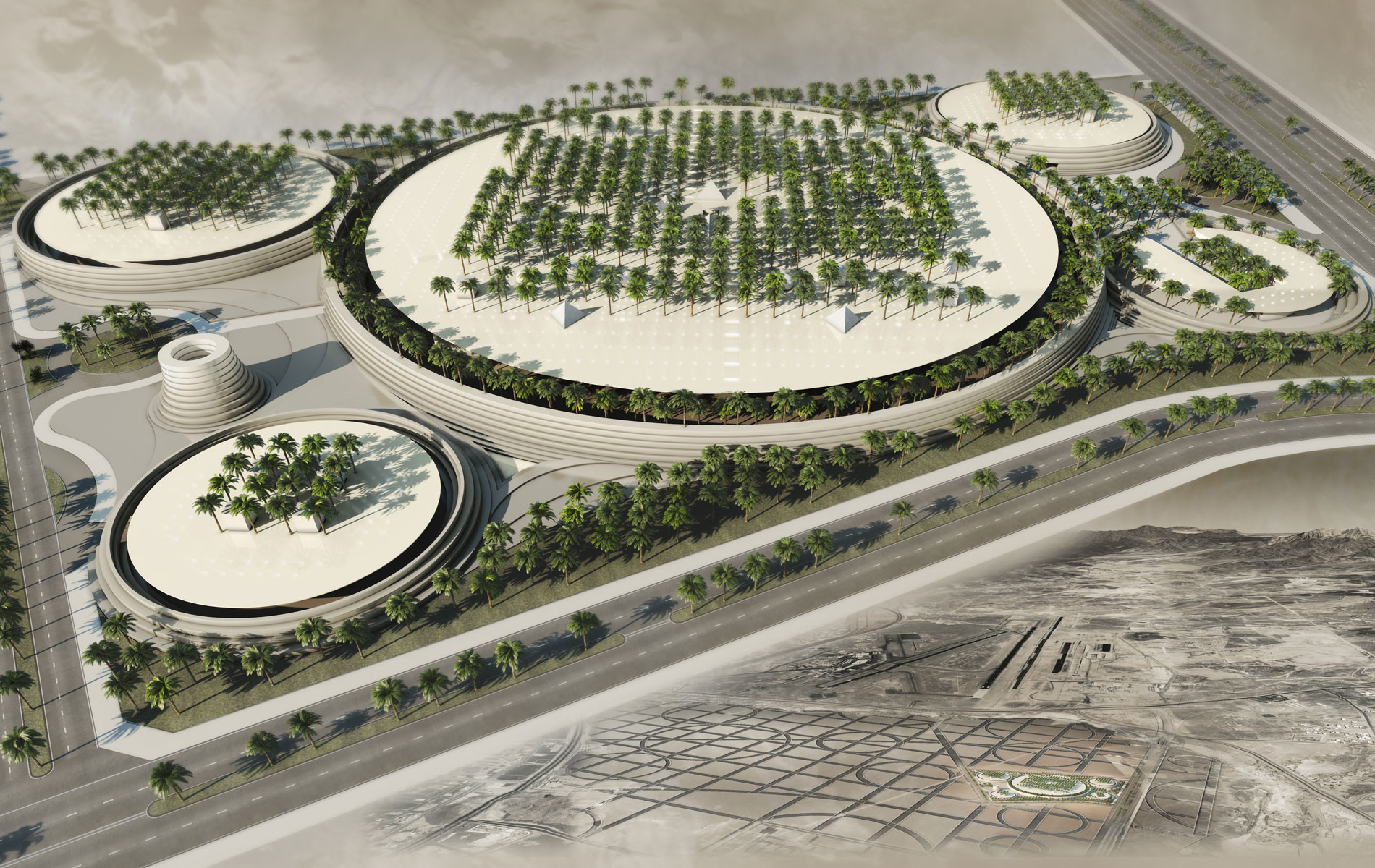 Although the Islamic civilization and the Western culture are different in many ways, they both promote the preservation of tradition, yet encourage technology innovation.

Islamic civilization invented geometry, the figure of the circle, the square and the square root of 2. Avoiding figurative expression, Islamic architecture and the design of the ideal city are defined by a strong geometry, which is seen as foundational.

The first Islamic city had a circular plan, with all spaces being enclosed in the circle representing the elemental symbol of unity and the ultimate source of diversity in creation. This traditional city, or rather the idea of this city, serves as the base and the essence for the creation of the Islamic modern city. Such a background has led us to choose a circular concept as the main representational shape of the project for The Noble Qur'an Oasis.

This unique civic and cultural landmark, with its sleek, minimalist design, is a symbolic container where the Islamic science and culture will be displayed. The Analysis, Research, Education and Dissemination of the Islamic culture are the central functions of the scheme.

Like in the ideal city, the project combines all spaces in a creative manner to meet the requirements of the functional program, including up-to-date technology adapted to the project’s contents. Occupying the entire site like a total oasis, the project provides diverse bright open spaces. The layout’s geometry offers the visitors the possibility of choosing alternative itineraries and different scenarios within the flexible structure.

This iconic project represents the Islamic city and its potential future extensions embodied in a series of covered circular forms, a palm oasis in the forefront, and fruit trees and native plants irrigated by a system of water canals creating a micro-climate. A traditional pattern of courtyards and narrow streets meshed within the structure encloses generously sized inner spaces, which define this center for the research, study and transmission of the Nobel Qur'an, as a unique place strongly related to Al-Madinah Al-Munawarah and its environment.

The simplicity and clarity of the scheme ensures the incorporation of the latest displaying technologies and education interactive tools. Designed with simple, pure lines, the inner spaces provide a calm environment for the study and research on the Nobel Qur'an. Playing a symbolic role at the heart of the complex, the design of the Noble Qur'an Library will guarantee the ideal conditions to preserve the books, scrolls and manuscripts.

The site and surroundings as understood from far away.

This large piece of land (200,000 sqm) is situated to the north east of Al Madinah in an area marked for future development and is well connected to Madinah City Centre by the major road system to the airport lying just to the North of the site.

The two runways of this Airport are the major objects in view and they are situated approximately 2 kilometers from the sites centre in a direct north south axis and angled a little north east, south west. There is a perimeter airport road separating this land in which the site is located.

A closer view of this land shows a distinct lava flow pattern from a recent historic volcanic eruption less than a thousand years ago. It appears that the lava is approximately a meter thick and we are informed that it will be cleared to be sandy colored rock as visible in the surroundings.

The landscape around the site visioned at a certain height is absolutely fantastic. Proto volcanic craters melting into each other produce unique compositions of sculpture with colors graded from deepest black through browns and red siennas to pure white. A true marvel, and probably unappreciated by the public. But this is the landscape of the Qur’an and its environmental effects on the prophet its essence.

To the north west of Madinah there are kilometers of oasis, palm groves, farms of fruit trees and a river let canal of running water. These palm groves are laid out on a grid system, an Arabic invention to maximize cultivation with available water from canals or reservoirs.

These oasis contain many of the trees and plants mentioned in the Qur’an and are essential reference for this project.

Madinah itself is a circular city centered around its imposing white square Mosque, radiates out to different rings of building development over time. The Nobel Qur’an oasis site is on the outer ring, far away, but connected to the center by radials.

Around the imposing Mosque the ancient city shows off its traditional courtyard houses and narrow streets as a famous example of Madinah City planning in past history.

To sum up the site is flat. There are mountains of volcanic formation in the distance, including a near perfect pyramid to the north. There are visual influences out of the framework such as the palm grove oasis, the inner city and the Mosque. But the principle influence is the Airport runway, it is very closed and is aligned directly over the site for the future important world centre of Islamic Studies. The Noble Qur’an Oasis.

The urban context of the park and gardens is quite clear in the Brief.

The objectives: the landscaping of the plazas and gardens should be inspired by the natural environment of Madinah. Its mountains, valleys and volcanic areas and its natural landmarks. It should also include shaded areas for families and use local rocks, plants and grass “and through this park runs a web of paved pathways which allow movement across the sides of the project and the design of the gardens must integrate vegetation with natural formation in a unique, functional and aesthetic way”.

Therefore all major activities follow flow paths from outside to inside and back outside to achieve this fusion. The palm tree back as the column.

It is propose to further develop the circular plan effect outside the site to envelope the neighboring lands, as with ripples of water on an oasis pool.

There is not an interference, just a concept of reading the landscape at a larger scale and applying this to the local urban context.