Read more
Save
Inside "Open: A Bakema Celebration" - The Dutch Pavilion at the 2014 Venice Biennale
Presented by:

Guus Beumer and Drik van den Heuvel, curators of "Open: A Bakema Celebration," sat down to speak with us about this year's Dutch Pavilion at the Venice Biennale. With the help of graphic designers Experimental Jetset, Beumer and van den Heuvel created an emblematic, stripped-down, research-focused display of a particularly Dutch idea: the "Open Society." This was all conveyed within and around a 1:1 model of architect Jaap Bakema's Lijnbaan Shopping Centre (Rotterdam 1954), constructed within the Netherlands Pavilion.

The hope, as Dirk van den Heuvel explains, is that "the elements of Bakema...may be useful, inspiring for our own practices today. Elements that he developed in questions to housing, planning, modernizing… I think when you come here you will recognize that there's lots of affinities, interesting things that we still work with and that we will work with in the future."

After you watch the video, make sure to read the curator's statement, and see images of the pavilion, after the break. 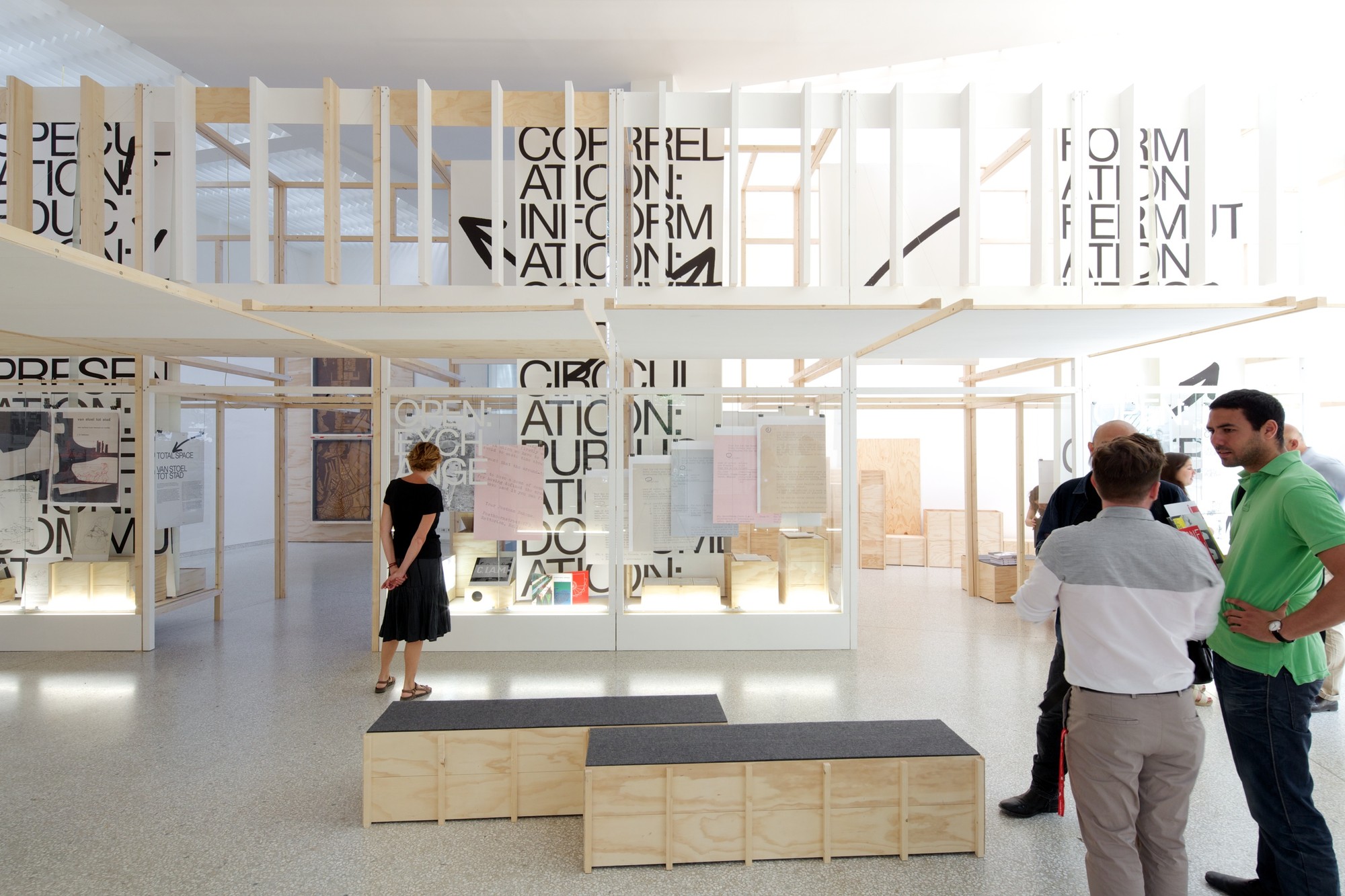 From the Official Catalog of the 14th International Architecture Exhibition. The Dutch contribution to the 14th International Architecture Exhibition proposes a critical rethinking of the idea of the open society through the work of Jaap Bakema. Bakema was a leading voice in the post-War avant-garde's of the twentieth-century architecture: CIAM and its successor Team 10. The shifting roles of the state and the market, the architect, and the individual citizen are scrutinized in an installation that unties a multiplicity of media: models, historical correspondence, photography, drawings, TV material, films and an online platform for new ideas for the open society.

Jaap Bakema (1915-1981) was a partner in the Rotterdam office Van den Broek en Bakema, famous for its design of the Lijnbaan shopping center (1954) that is still a hallmark of an architecture of optimism and rationalism that served the construction of the post-War welfare state.

Bakema aimed to build towards a new, open society--democratic, egalitarian, and all-inclusive. He believed architecture should accommodate the emancipation of the masses while allowing for the self-realization of the individual citizen.

What is the relevance of such idealism today? How does it related to the present tone of cynicism, the absence of ideological debate, and the preference for populist politics at the heart of our democracy? What was the open society then? And what could it be today?

Bakema and his team were responsible for some of the most monumental proposals for the Dutch welfare state. Among them was the famed Plan for Pampus (1964),  design for a new-town extension of Amsterdam. Such large-scale planning was not only in service of the post-War economic boom and the growth and change brought about by the new consumer culture of the second half of the twentieth century. In Bakema's view, it signified nothing less than a reconceptualization of the Dutch landscape and identity, as can be seen in his famous contributions to the last CIAM conferences: designs for Rotterdam Alexanderpolder (1953 and 1956), and a regional plan for Kennemerland (1959). Here, the vast expansion of the Dutch polder landscape is combined with the serialist configurations of elementary building blocks and tower slabs, a formal language that elaborated on the pre-War experiments of De Stijl and Dutch Functionalism.

After postmodernism, after the demise of the welfare state, and beyond the neoliberal market model, Bakema's work once again provides us with a touchstone for rethinking the ideals of the open society: comforting in its generosity, awe-inspiring in its bold poetics, and breathtaking in its unabashed ambition and determination.