Text description provided by the architects. Some houses close in on themselves when connection with their surroundings is not desirable. However, others open up to their setting when it is clear that it endows them with qualities and provides their raison d’être and hence must become an intrinsic part of the project. This is the case of the Juncal y Rodney home since it is built on a plot of land located on the Begur massif (Girona) in one of the most sublime settings of the Costa Brava. The longitudinal volume of the north-south-facing building of two storeys – the upper one with three bedrooms and the lower one with the shared spaces – is thus open to the Mediterranean and the series of mountains and coves that are glimpsed on the horizon.

This, then, is a house opening out towards distant views, although it is protected from behind by means of levelling work on the steeply sloping land. Indeed, the construction clings to a long continuous wall running parallel with the access road and joined to a shorter wall aligned with the dividing wall of the neighbouring plot. These walls are finished with local stone, as are the masonry walls of the site. They therefore shape the land into a large terrace, while also providing the backdrop for the construction.

The house is entered via the upper floor, from the downwards sloping road, at the highest point of its land. This entrance clearly divides the volume into two parts, which are linked by means of a central courtyard offering views of the rocks remaining after the excavation work on the plot. Apart from the entrance porch, this bare space is connected to the stairway which is set into the façade overlooking the garden and, accordingly, accentuates the division of the house into two parts.

Acting as a kind of areaway, another smaller courtyard on the southwest corner affords views of the rocky landscape from inside the house, which is also the case with the kitchen. Consequently, although the volume is attached to the stone retaining wall, the latter is breached by these two courtyards, letting light in and opening up visual perspectives between the two levels of the house. All of this is further enriched by the set-back volumes, the cantilevered balconies and overhanging terraces.

A considerable part of the land has been left free since the house has been built in one of its corners, which means that a large, flat and open platform projects out towards the horizon. This level ground provides the necessary leisure spaces for a home that is mainly occupied in the summer. The terraces, the garden, the barbecue and swimming pool are therefore an integral part of the inside spaces of the living room, dining room and kitchen, which have been left totally open by means of large plate glass windows. This spatial continuity is framed by the lift-slab of the upper storey which projects beyond the outer limit of the lower floor.

The contrast between the two storeys is evident since one is opaque and compartmentalised, while the other is open and diaphanous. The Juncal y Rodney home is, then, a pavilion of bedrooms floating over a platform that offers different spaces for good living. The fanning-out form, by means of which the project is essentially designed – freeing corners in the upper part and literally opening out to the sea in the lower part – unequivocally establishes relationships between the house and the sea, the plot of land and the craggy geography of the Costa Brava, the rocky ground and the spectacle of Mediterranean skies. This is a house built between rocks and horizon. 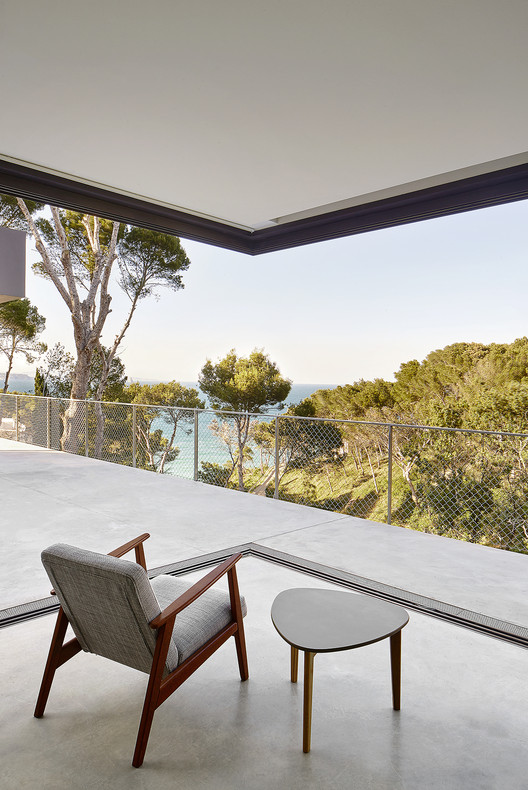