Text description provided by the architects. The Allianz Headquarters is a hybrid-office and the pinnacle of a master planned mixed-use district on the edge of Zürich’s city center. Comprised of a 20-story tower and a 5-story annex, these two components are externally linked by a series of four bridges, and vertically linked by numerous interior voids and staircases; as such, the Allianz Headquarters can be experienced as horizontal and vertical landscape of neighborhoods. Fluidly connected to the city center by a multitude of public transportation options, the building encourages the blossoming of twenty-first century office culture, which demands flexibility in space and its use, via its hyper-hybrid programming that amplifies ‘interiority’.

The entire lobby and ground floor are publicly accessible, ensuring a continuous animation throughout both, which compliments the adjacent public square. A central staircase rises from the lobby up and into the 20-story tower, allowing employees to, if desired, meander throughout all levels of the office without entering its core. A café and restaurant are located on the fifth floor, rather than within the lobby, which creates a buffer zone between public and non-public areas. A ‘business center’ is located one floor below, and contains meeting rooms for use with external clients. This ‘business center’ enables employees to meet with their guests, without the need for elevators.

This new district’s master plan mandated that all building façades be composed of natural stone, yet it was chosen to frit this building’s full glass façade with an abstracted pattern of Onyx marble–from Mies van der Rohe’s Barcelona Pavilion–which allows the building to blend into its context while simultaneously maintaining its distinguished stance. Each element of the façade contains a closed cavity system, in which an aluminum coated silver curtain hangs, which fluctuates its degree of shading by responding to external environmental factors–a process administered by a computer controlled algorithm.

Interior heating and cooling occurs through a paneled ceiling system that utilizes concrete core activation and concealed air ventilation. These 1.35 x 1.35 m panels are composed of ‘crumpled’ steel sheets into which a three-dimensional pattern, derived from traditional ornamentation of Swiss chalet eave, has been stamped, which introduces a larger scale to the interior office spaces by decreasing the amount of visible ceiling seams. Micro-perforations in the panels maintain ventilation, allowing for no visible interior air ducts and the placement of an acoustically absorbing sheet on the back of each.

Inhabitable volumes adorn the roof of the lower building, with several garden terraces for employees. These gardens contain a singular red Japanese maple tree, which return in the landscaping of the central courtyard below. Both the 20-story tower and 5-story annex are adjoined underground by a tri-level 300 car parking garage, where most of the extensive IT and mechanical facilities are stored. Similar to a home, the Allianz Headquarters has been infused with espresso corners and lounge like spaces throughout, for instance, its four 8m wide bridges, to stimulate informal conversation within this highly formal working environment. 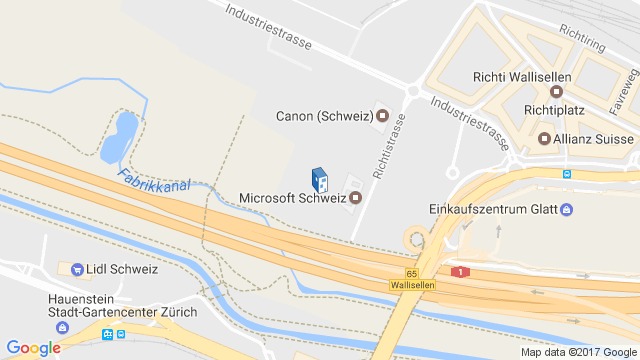