Commissioned after winning an international competition in 2010, Portuguese architect Álvaro Siza Viera and Granada-based Juan Domingo Santos have unveiled designs for a new entrance and visitors center at the Alhambra World Heritage site. A result of “superimposing a regular geometry over a territory of topography,” the new gate rearranges visitor access into the more than 1000-year-old monument through a series of enclosed, shaded courtyards and open, sunlit terraces.

Following to his experience at the Alhambra in 2009, Siza journaled about his envision for the new gate, stating: “…from bright sun to shadows, from warmth to coolness, from wide to intimate focus, I like to dream about my project before I set it down in any detail.”

“From this subconscious memory arose a preliminary structure that blends nature, past and present, and in equal parts shade, water and trees as key elements,” described António Choupina, Aedes curator of “Visions of the Alhambra,” which will be on view in Berlin from March 22 through May 8, 2014. “This condition allows the building to become one with the landscape itself, articulating palimpsests from the old farmlands with the Generalife’s lower garden elevation. The horizon is set free as the site spontaneously gives rise to a panoramic platform, integral to the contemplative aspect of Muslim culture and to the distribution of 8000 daily visitors. Common waiting lines are avoided through complex spatial sequencing and a topographical systematization of people’s movements.

“The duality of topographical intrusion and extrusion makes the new building appear smaller than it physically is, emphasizing the Alhambra’s scale by hiding a large part of the project’s 5700m² in the terrain. The outstanding pictorial quality of the vestibule is a consequence of this contraction and expansion of space, instigating a morphologic voyeurism through a myriad of intercrossed views and strategically placed light wells. Light is in fact the central character in this architectural underworld.

“It becomes solid as it rips through the shadows with dramatic intensity and personifies the twisting motion of the main axis in the foyer. The composition is subsequently accentuated by its volumetric backbone - the restaurant/bar - and by the aesthetic clarity of the open space, articulating all other functions in an enclosed perimeter.

“The visitors are at last reunited with the sky as a courtyard carves out their way to the outside and directs them to the auditorium and finally to the Alhambra square. The whole earthwork reveals itself as an altar to the normative yet distinct patio structure where the architect pays his respects to the bonding of nature with the art of building. The locus in Islamic practice is represented through the notion of water as a continuous cycle of infinite repetition. This almost sacred concept is channelled throughout the new atrium by successive water ponds in order to enhance the sensation of flow between spaces. These interventions symbolize the ever-living synthesis of the Alhambra.”

Learn more about how to see the new gate’s design on view at Aedes Architecture Forum Berlin, here. 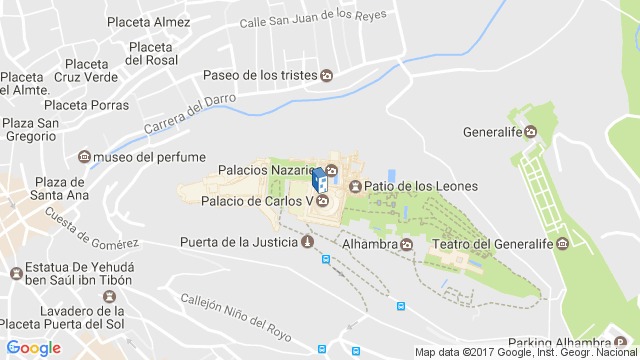