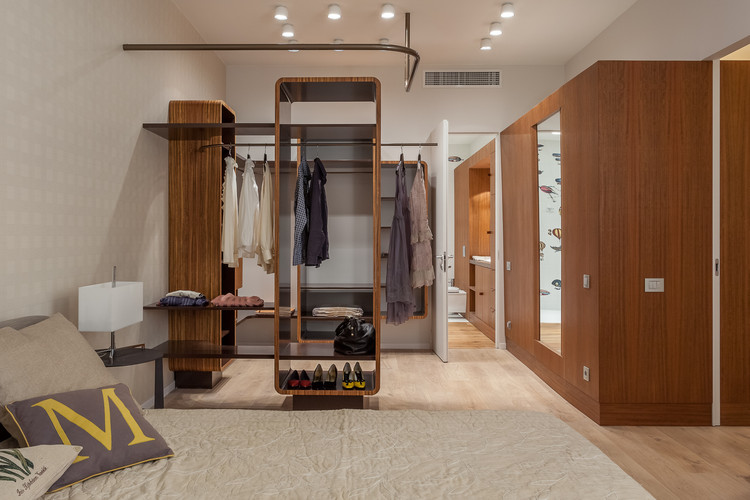 Text description provided by the architects. A project for a globe-trotter who decided to put down his suitcases in Moscow. For how long? No one knows. He could leave at any time. What if he took the furniture with him?It’s a travelers tale too, for the architects - based in Paris (France) but always on the lookout for interesting projects and who were asked to work in Russia.It is a travellers tale too for some portuguese craftsman who weren’t put out off by the Siberian winter

This is how it started“I know you are a long way away, but can you redo my apartment?” he asked.Yes, we replied without any hesitation. Then we embarked on a passionate journey that was to take almost 2 years.We went to see the neighborhood and the brick building built on the traces of a former factory and we looked at the view from the windows.The flat, a rectangle in concrete 16 metres long by 9 metres wide lit by large windows at the 2 ends.

Right from the outset, the architectural desire to accentuate the light washing through was a key idea and above this all the idea of travel as an inspiration.

The future inhabitant’s main desire was to live in a contemporary but functional home. And so a module was born, in the middle of the rectangle. It concentrates all the functions, separates the rooms one from another and allows us to break free from corridors and reduce the amount of furniture. Clad in a single material (mutene timber), it provides continuity and consistency while the rooms that gravitate around it have their own decoration :  carpet of cement tiles in the kitchen, tartan mosaic in the shower room, bookshelf wall paper in the office, decorated tiles with balloons in the bathroom....

Like a giant trunk left lying there, it’s different faces open on to the entrance hall (a pile of suitcases), and on to the kitchen and living room (a concealed bar). In the bedroom, it incorporates a mirror facing the open dressing room, while in the bathroom sanitary fittings are recessed.

Then we had to find people to make it. This stage would take us 1200 km away from Paris, in the north of Portugal. There, we found the leather and the wood we needed. We spent two days in the factory to get the details worked out. Several months later that the containers reached Moscow after travelling through the Atlantic Ocean and the North and Baltic Seas. Our friend Julia Orlova, architect from Moscow supervised the construction and looked after the unloading of the 40 m3, and the Portuguese joiners arriving to install the whole module in 5 days.

Today the owner is living in his apatrment. Nothing is preventing him from taking off with his suitcases again. But would he really want to? 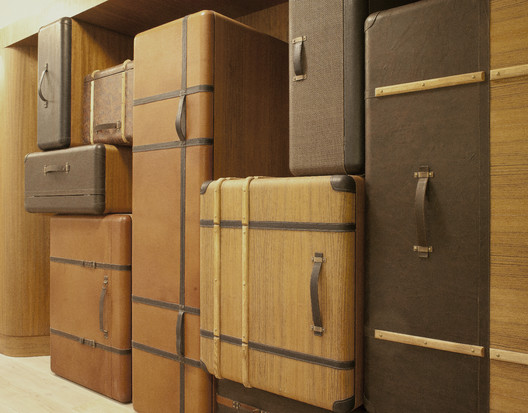