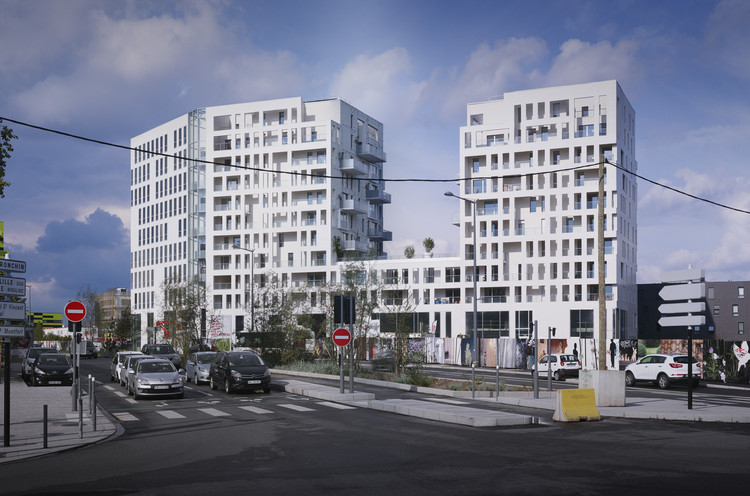 Text description provided by the architects. Symbol of rebirth of a neighborhood, the Arboretum project is a continuation of the development along Hoover Boulevard and the very metropolitan Euralille 2, articulating of the future Porte de Valenciennes neighborhood.

This strategic position induces a sense of transition from the economic heart Euralille to the mixed-use neighborhoods of housing, commercial, and amenity programs, in which the quality of life takes precedent over monumentality. The project marks a step, an initiation, a hyphen between two neighborhoods.

The program distribution responds to this contextual duality: 2800 m2 of offices are exposed on the boulevard Paul Painlevé, taking advantage of the strategic situation of available frontage on a major urban boulevard. The 68 units are inserted on the interior of the block, in contact with the neighboring residential fabric.

The ground floor serves as a base of 5.60 m that unites the composition into a coherent whole while providing 900 m2 of retail space. These retail spaces (divided into cells of 150 to 300 m2) are all directly accessible from the major boulevard with the most pedestrian traffic. Additionally, certain spaces contain mezzanines that allow for specific layouts of service programs, for example.

The facade on the boulevard takes the form of a grid of an infinitely extensible module. Applied as a "plug-in", it responds to the function within, expanding to form loggias or expanding to develop a double height - exposing the duplex apartments that form the "skyline" of the block. Sometimes taut, sometimes porous, the module allows all functions to coexist harmoniously, revealing only the texture of its material.

The front wall inflects when it encounters the opening that becomes a vegetal void. This void creates an open space at the heart of the programs, a link between the two towers, demonstrating an attention paid to nature in a global effort of neighborhood densification.

The breakdown of the program allows one to consider the articulation of the different entities around four rational, identical volumes whose base dimension of 18 m x 18 m strengthens the cohesion of the elements and the identity of place. This supports the concept sought after of gathering. The plot is in fact seen as singular entity with a unit of treatment. There are no secondary facades, but a variation of the base unit in reaction to a specific exposure or a particular situation.

Offices, shops and activities are divided between the pedestal of the whole project and the tower positioned at the corner of Boulevard and the new street. For their part, the housing benefits from a square layout with a central circulation core. Almost all apartments benefit from double or triple orientation. The main living spaces are provided with large exterior spaces, whose specific articulation is defined by the character of its exposure.

In their diversity and implementation, these exterior extensions highlight a multiplicity of life styles characteristic of multi-family housing.  The smaller units are grouped in threes with a common staircase connecting them directly to the garden.

The larger apartments have a generous exterior loggia on the principal façade and balconies in the vegetal void. Sometimes a double height loggia is complemented by a bay window allowing ventilation towards the void and passive heating on the facades with optimal exposure.

The general envelope of the assembly is made ​​of a material of simple construction: brick. Its rectangular shape continues the geometric decomposition of façade module. White in color, it evokes the weaving of cotton thread. Its implementation shows that the simple basic module can generate freer forms than those which had been initiated in the postwar industrialization of building systems, whose image is still associated with the area.

The compact and efficient massing of the project, a comprehensive bioclimatic design – particularly, the insulating envelope and ventilation - and specific interventions - solar panels intended to provide 50% of the hot water for the housing units, and air chimney in offices – helped qualify the building as low energy consumption (BBC), as desired by the client Nacarat. 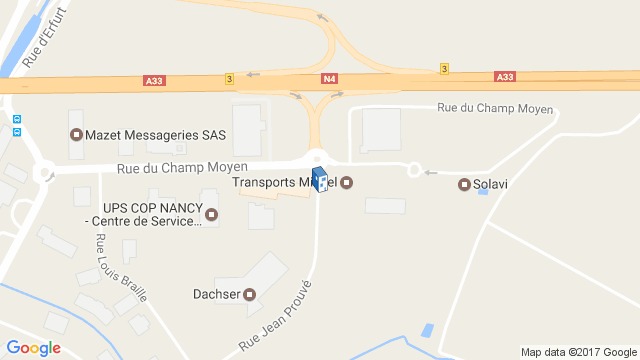