Pink Floyd, "considered to be one of the icons of revolutionary, progressive music," was adept at using "sonic experiments and philosophical lyrics to cross social boundaries and redefine values." The international design competition A House for Pink Floyd similarly aimed to translate that philosophy into a built architecture, the focus of which being on "creating any object of architecture that transcends rules and standardization and innovates through itself."

With no constraints to site, program or size Arqbauraum's entry, "based on man meeting with himself, and doing so through the senses," aims to "return to man a place for him to pulse with the world, a space that appealed to solidarity and to the strength of the use of words."

According to the design team, today's "architecture is endowed with a star system that dictates the trends as the world finds itself grappling with political crises and austerity." These components have created an "explosive cocktail," leading to the degradation of the notion of habitation in our cities. By subtracting the mass of the ordinary house as an allegory to "the reality we now live in," the absence of mass intends to lend the design a certain "character and a lightness."

"We wander through a synesthetic route that begins from North and ends to Nascent. Through it we primarily find the purification volume that intends to raise our vision and audition senses."

"In the following box we find the shadows, that symbolize the air. It is aimed for the individual to question about the visually perceptible truth and also for the visual experience to assume tactile characteristics – feeling with the hand the form that is observed."

"Through the pathways between the boxes we are at constant presence of the soil, the nature, the use of the smell that refers to the memories and to the quest of man, through glades that were created with the subtraction of the total volume."

"In a third moment the visitor is confronted with the light that symbolizes the fire and the sense of feeling through the skin."

"After reestablished the equilibrium of the senses and the soul and mind opened we find the last two spaces. One is a space with books and the other with dialog, music and exchange for the house of Pink Floyd is what each and every one of us wants it to be."

References: A House for Pink Floyd 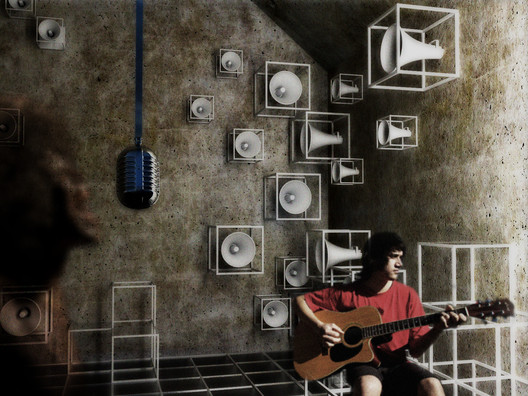