Supermarket stores have become the last link in the linear and out of consumer sight “farm to fork” chain. For the new Chedraui Supermarket Store in Santa Fe, Mexico City, Rojkind Arquitectos proposes that folding the chain onto itself and bringing it into view becomes an opportunity for interactive and educational programs, connection to local markets and a place for community. The proposal comes in response to the company’s desire to launch itself into a new direction offering something more that just groceries and goods; it tries to position the brand in a new market segment not considered to date, to help establish the new sustainable direction the company is trying to achieve and to offer a unique experience to it’s consumers while giving a public space back to the city.

The new store occupies the footprint of an existing cinema directly adjacent to the Santa Fe Shopping Mall. Besides the store and new rooftop-parking garage for 250 cars, there is a 3,128m2 orchard on the terrace level that customers can access directly from the store to learn about organic farming and select their fresh produce for purchase. On that same level an area is provided where a weekly market comprised of local farmers and producers can sell their goods adding to the diversity of products traditionally offered by the supermarket. This orchard can also be used by the nearby office workers and neighborhood residents as a place of “refuge” from the car driven development of Santa Fe which lacks public spaces and parks.

The facade is composed of 531 GFRC (fiber glass reinforced concrete panels) which give the store its very dynamic signature in direct contrast to the typical “ retail boxes” which have sprung in the neighborhood. Four large tensile structures shelter the parking area and pathways to the orchard from the intense sun and become an iconic landmark for the area as they glow at night. 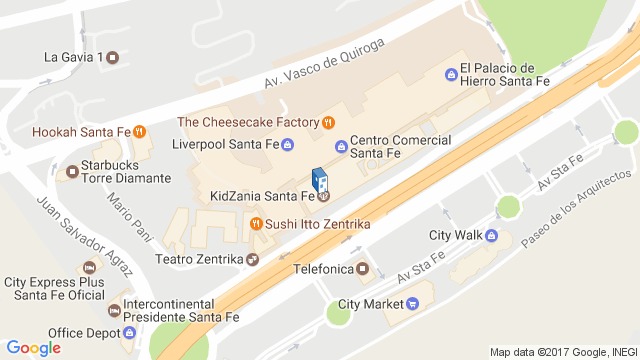