Winners have been recently announced for the Lavender Lake art factory competition sponsored by suckerPUNCH. This competition proposed a new artists factory for the “public space” site of the Gowanus Canal in Brooklyn, New York.

The proposals were designed to both foster creative production and attract visitors to the factory and neighborhood. The factory will contain private/shared art studios, a storefront gallery/bar, analog/digital shops, and live/work spaces for rotating artists in residence.

Pablo Esteban Zamorano and Marcos Cárdenas from Santiago, Chile won the competition with their proposal “Water Fields”. See the winners and honorable mentions after the break.

An art factory, an open public space, a beach, a picnic field, a crop garden, a space for the community and for culture, a land open to the water, the city and the arts. The border condition (water-land) of this site made us think about how these limits could react with each other to create something new. An hybrid space product of a simple movement: the inundation of the site, the analysis of a close up view of the canal and the projection of that into the site as a geometry, to translate what used to be water into land but now as a construction of the memory of the canal. The Gowanus Canal is now a new public space for the city that brings the canal back to the people. 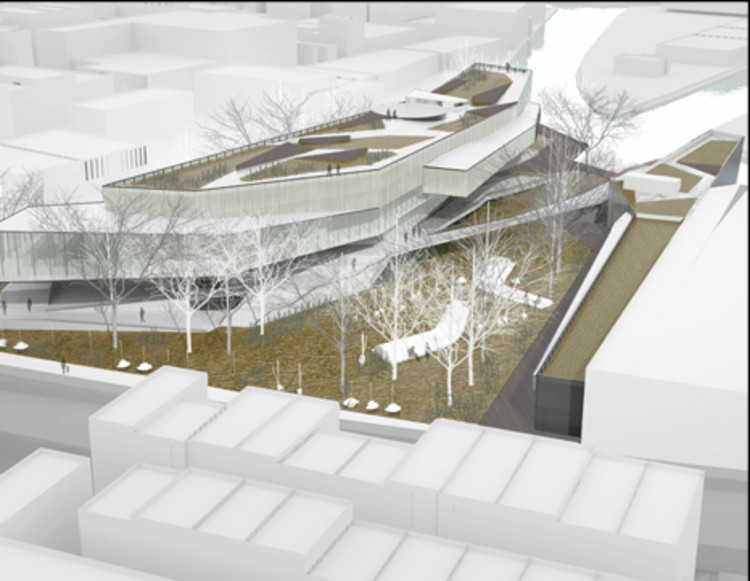 Given the disparate relationship between the factory typology and public place exemplified by the surrounding context, the project seeks to explore the tension between the two as an impetus for a potential hybrid type. By shifting the ground plane on the site, the project’s parti allows for the multiplicity of the datum rather than it’s displacement, resulting in a site condition that aims to extend the synthesis between the public and private domain.

Typical rude ambience of Brooklyn, train bridge on one side and the river on the other side. The urbanistic juxtaposition of the industry in the east and the living area in the west. Missing of the green places. So we tried to make a project which has got some similar story with the surroundings but with using new materials. Create the place with the symbiosis between the park/building.

The Gowanus site is A toxic body in which the degeneration of the space is a direct consequence of the industrial and criminal activities that took place here over time. The environmental clean up is a necessity. There is an hygienic problem that needs to be addressed, and social potential that need to be unveiled. A mere sterilization of the site is not enough, there is a need of oxygen to sustain life. The appearance of a gowanus social movement can be the engine of renovation. Such a movement requires a specific space that embed also the dark and degenerated aspects of the area within an hygienic project.

Our project emphasizes public space for the community, a YMCA with a twist: art spaces + community spaces + research spaces. The main building, located to the north along fifth street, combines space for art with an environmental research and remediation program, including offices and research labs, which makes the project economically sustainable. We were intrigued by the concept of industrial symbiosis and the notion that the site’s industrial legacy could be transformed into an amenity for local residents. By incorporating site remediation within the program and structure, the project serves as a demonstration of a new locally focused strategy.