Designed by PM²G Architects, in collaboration with Satellite Architectes & Menu Design, their iconic proposal project for a new cultural center in Guadalajara embodies and catalyzes the cultural scene over the Chapultepec Avenue besides forming a new attraction for the city. Their design, which was awarded an honorable mention, includes a series of three alternate solids that are combined with transparent and concave spaces. The rotation of the volumes towards the sky gives the building its dynamic and spectacular force. More images and architects’ description after the break.

Guadalajara is known as the 2nd most populous municipality in Mexico and the well-known vertical architectural route of the Guggenheim Museum in New York is reinterpreted here in the new Chapultepec Cultural Center project. In this case, however, unlike the Frank Lloyd Wright scheme, the route turns to the city and thus provides visitors a 360° view of the city of Guadalajara.

A monumental staircase, "part of the tradition of Mexican pre-Hispanic architecture" evokes the ascension into heaven, allowing to wander the building and at the same time serving as a podium and terrace to display certain works of art; this possibility extends from the inside out, becoming an external tour and concluding with a panoramic terrace, the stair as a magical space to exhibit, contemplate and communicate, a walk in the pleasant climate of Guadalajara.

The exhibition halls, including 300 and 500 m² spaces, are composed by generous spaces with great heights designed to accommodate different types of art. Going from the White Cube hosting classical painting and photography exhibitions where lighting is indirect and natural. Moreover, the Black Box designed as a space for video projection and installations.

The auditorium space has been designed to offer great flexibility to adapt to all kinds of shows, dance and theater as well as conferences, workshops and projections. The retractable seating once extended offers optimum visibility for each of the 200 spectators, and releases the space when retracting (disappear) in the back of the room, thus becoming an ideal place for concerts, and more. The stage is slightly elevated, the backstage space has comfortable dimensions and can be opened to the auditorium in the case of major events that require it; addition to this, a small room to be used by the entire production team completes the device.

The white concrete poetic facade is composed by a series of ruled surfaces perforated in a dotted evolutionary pattern, in some cases, the perforations as windows, others as mirrors and some cases as luminous LED spots. Thus, the facade is crafted to reflect the sky with a gradient from top to bottom, revealing an evolutionary play of light throughout the day. Beyond the monumental staircase, visitors have easy access to each level through a vertical circulation core. The compact core is the backbone of the building and serves to effectively distribute the flow of people and cargo transportation.

The ground floor opens onto the city calling and inviting people to come to the inside; an entrance hall containing a ticket office, cloakroom and control, as well as a library and a small cafe are responsible for receiving public warmly. The access to the underground parking and the loading bay area are located on the minor street that faces the terrain, the last being directly connected to the freight elevator and warehouses for supply purposes.

The structural system of the building is composed of a concrete central core and a network of columns located with and offset of 6mts from the façade and intertwined by a series of cantilever metal beams of varying dimensions according to seismic requirements.

At last, on the top floor the architectural route culminates in a restaurant-terrace space, offering a unique view over the skyline of Guadalajara. 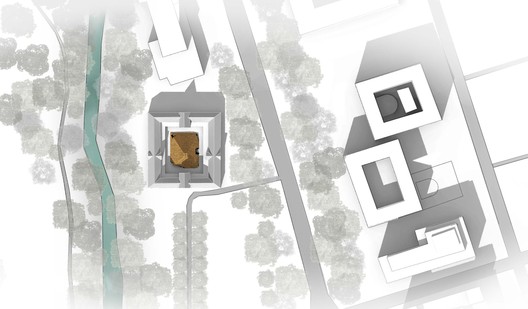