In my opinion, the best sustainable projects have been in small scales. Urban scale projects have been more difficult to get going, due to the their inherent complexity. But I am confident that recent initiatives are about to make the step forward, specially the ones that are being produced on countries that have the have their governments focused on this.

On of this examples is the recently awarded Low2No design competition, organized by Sitra (Finnish Innovation Fund) and the City of Helsinki, to find a on design a large building complex on a reclaimed harbour at the western edge of Helsinki’s central business district.

Given that the repertoire of sustainable urban development models is still in its infancy, the question of “who & how” is our question of first order. WHO: We believe that identifying the best team and approach is the key factor impacting the robustness of the final solution. HOW: Our competition is designed to seek approaches for four central objectives applied at the scale of a city block:

Videos and boards for the winning and finalists entries  after the break.

In 1990 Finland became the first country in the world to establish a carbon tax. Now, 20 years later, SITRA and Finland will demonstrate to the world a bold solution for cities and how they can address climate change.

Our vision is to join SITRA on this journey of design and delight that will demonstrate and ultimately diffuse the ideas, policies, technologies, strategies and economic frameworks that conceive the City as a Living Factory of Ecology.

c_life (City as Living Factory of Ecology) is a real time and real space demonstration of how to live, work, play and learn, producing innovation that benefits people, the environment and the economy.

c_life will attract Living, Leisure and Innovation + Entrepreneurship creating an environment that will bring people and families to live and work in this new centre of Helsinki, demonstrating that moving in to a well designed and sustainable city block is an affirmative action leading to a healthier, more productive and creative lifestyle.

c_life is a living factory of ecology where SITRA will attract Start Ups and Companies by creating a stimulating environment for entrepreneurship, where prototyping of built environment policies, technologies and services can be showcased.

c_life is a carbon negative initiative. People living in c_life will see their carbon footprint reduced by 37% in 2012 and by 43% in 2037, compared to living elsewhere in Helsinki. An offsite wind farm, funded by the development, will offset the remainder of the carbon, making c_life carbon negative by 2021.

c_life’s 50 ideas to reduce carbon emissions will enable people to understand choices about their energy, transport, food and consumer goods to impact their carbon and ecological footprints in a transparent, engaging, fun and cost effective way.

c_life is the first to benefit from the Climate Neutral District, a governance and economic framework that ensures a cost effective and holistic delivery of Jätkäsaari, as a carbon negative proposition. This proposal ensures that individuals, communities and companies investing in it will share the resulting financial and environmental benefits in a timely and concrete manner. This will strongly contribute to make c_life and Jätkäsaari replicable, vibrant and a resilient carbon negative community, where businesses want to be and people want to live. 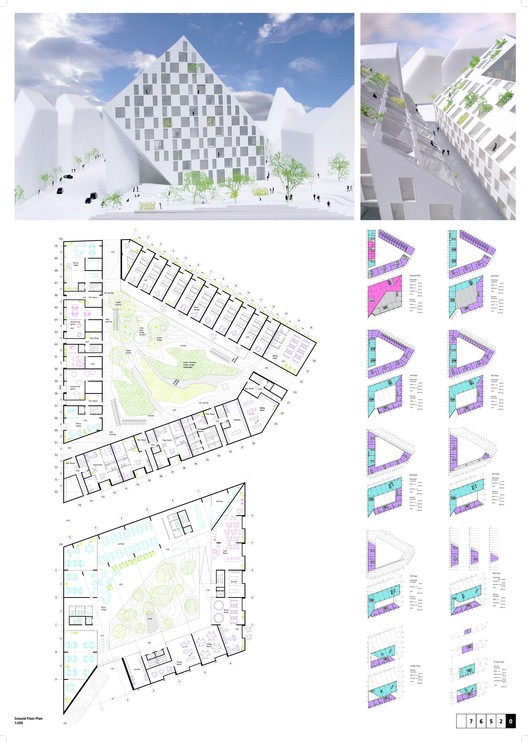 We have 3 main objectives:

The ‘Low2No cradle’ looks and feels different, creating a new kind of public space in Helsinki. The design is centred on the ‘market of ideas’; a vibrant urban foyer located at the heart of the family of buildings that comprise the development: seamlessly connected to Helsinki and the world.

The building should be iconic and exciting if is to help transition Helsinki and Finland towards a carbon-free society. We have defined a new approach to sustaining carbon-free communities and lifestyles at the heart of the city; ranging from experimental roof-top urban farms to personalised web-accessed carbon portals, to IT smart communication and control systems, communal solar saunas and flexible and adaptable living / working spaces.

The building shows how solar technologies can be used in Nordic regions to generate all the electricity requirements from building integrated systems as well as using waste heat from Helsinki’s power stations, storing it underground in the summer and re-using it for space heating in the winter.

If adopted across the metropolitan area, the Low2No Helsinki Principles will reduce overall emissions by 75% by 2050.

Conceived as an urban generator for Jätkäsaari, the project is located on the most visible and prominent site on Jätkäsaari. It will be the first building that comes into view as one approaches Jätkäsaari from downtown Helsinki. The first building to be constructed, it is designed to be the harbinger of the sustainable future, and witness to its unfolding over time.

The strategies of sustainability employed in this building complex prefigure those of the larger project. These strategies include: the use of wood gas as a fuel for an on-site micro electrical and heat generator; solar panels on the roof and south facing walls to produce electricity; construction that privileges the use of wood, both for its cultural/economic value as a native material, and to embed carbon within it, avoiding the emission of carbon by reducing the amount of concrete used; and ready access to public transport by both tram and boat.

One of the most important aspects, and a key sustainability strategy of this structure is the high level of programmatic flexibility of the building. In addition to containing multiple programs, the design and location of the cores allow the programmatic contents of the building to be adjusted not only in terms of location, but also proportionally – in relation to one another – without disrupting the basic legibility and civilized use of the building.

Finland has a history of surmounting collective challenges with nation-wide rebuilding projects. Currently, Finland has one of the world’s largest per capita ecological footprints, and faces an extraordinary challenge in overcoming its environmental deficit.

Built on Jätkäsaari, but learning from Helsinki’s core, THE REBUILDING is a tool for generating more density, more diversity, more City at the building scale. Two Residential Towers, repurposing Finland’s steel capabilities for sustainable and adaptable construction, provide light, air and views to its inhabitants. Its Headquarters unites the need for community-building with the seemingly contradictory demand for flexibility. Its Urban Infill offers 50.000 m3 of potential, capable of being “tuned” to meet the specific and changing needs of its neighbourhood, while affording greater stakeholder participation. Although it reduces energy consumption by 39% and carbon emissions by 50% relative to a comparable code compliant project, THE REBUILDING recognizes that urbanity itself is the embodiment of sustainability. It is dense, diverse, evolving and full of people—living and working, meeting and sleeping, growing up and making things.

A nation of immense financial, natural, infrastructural and intellectual wealth, Finland also possesses a unique catalyst to power systemic change: Sitra. It is time for Finns to galvanize these strengths to meet the challenge of carbon neutrality, to become a global exemplar.

REBUILDING 2.0 is the strategy.

THE REBUILDING is the first step.

ReciproCity is an architectural principle applicable to any given master plan, land use map or urban matrix. ReciproCity optimizes the potential benefits of natural daylight, sky exposure as well as passive and active solar heat gain.

Rather than focusing selfishly on the singular project it is a principle that offers mutual exchange for mutual benefit.

By applying design parameters to the individual block guided towards optimizing the conditions for its neighbors, and by letting the neighbors reciprocate the courtesy; we have developed an urban volumetric logic that creates optimal conditions for all while simultaneously ensuring a spatially varied and visually stimulating townscape.

In addition to the principles of ReciproCity we have suggested a whole palette of ideas operating at various scales: from the scale of the inter city network of ferries to the scale of the individual living and working unit. The ideas include the active use of geothermal heat storage and earth cooling as well as cleaning the air and water using the natural properties of selected plants.

These ideas are driven by technical capabilities and functional demands and are free to improve and evolve as habits change and technologies improve during Jätkäsaari’s gradual completion over the next decades.

The words ecology, economy and ecosystem stems from the greek word for house: oikos.

To design our cities and buildings in such a way that they form sustainable equilibriums for the pres- ent and the future, is to design ecosystems. It requires a systemic approach to architecture and urbanism that doesn’t distinguish between city and landscape, manmade and natural, but attempts create holistic entities that channel the flow of people, goods, light, air, heat, water and other resources in a form of perpetual motion engine of renewable resources.