Save
An Interview with Rocio Romero, Pre-Fab Pioneer
Share
Or
Copy

It's not everyday that Peter Goldberger, former New York Times architecture critic, says an architect's work stands out for its "clarity, simplicity, and grace.”

And it's even rarer that Goldberger would choose those words - not for a new museum, chapel, or university building - but for a small pre-fabricated house. However, the pre-fab homes of Rocio Romero are lightyears away from the Sears catalog homes of yore, and more than deserving of the high praise they've garnered.

Romero has been making headlines ever since she introduced the LV house, her line of affordable, modern pre-fabricated homes, over ten years ago. With pre-fab becoming everyday more mainstream, we decided to sit down with Romero to find out what inspired her to enter in the world of pre-fab, what sets her designs apart (and why they have garnered such a fervent following), and what she sees as the future of pre-fabricated design.

Read the interview with Rocio Romero, after the break... 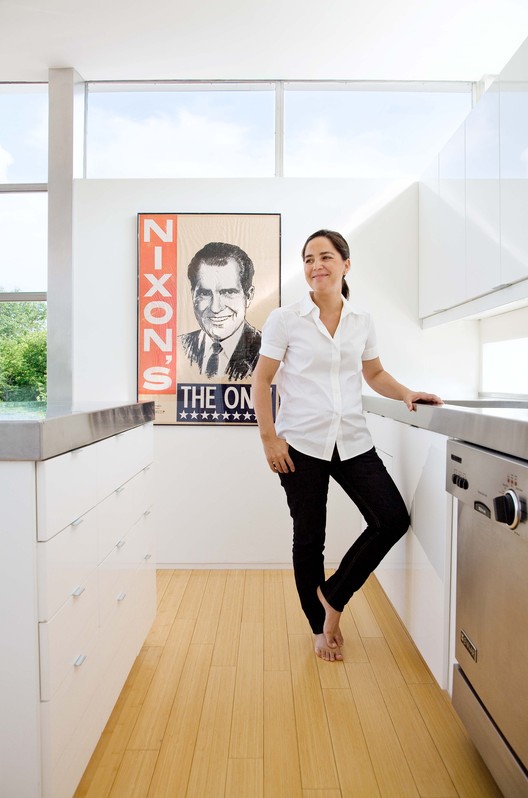 I have always loved art, for as long as I can remember. I became interested in architecture in high school through an art history class. It was not until I was 18 that I realized that I wanted to design buildings. I was backpacking through Europe at the time and fell in love with architecture.

Where did you study?

I am committed to producing simple, modern, green designs.

We rigorously employ the principles of simplicity to produce spaces that promote natural air and light, have balanced proportions and clean lines, and whose construction is straightforward and affordable. Our minimalist tendencies and careful attention to detail ensure clean lines. This causes us to rethink traditional solutions.

How did you become passionate about pre-fabricated architecture?

I designed the LV  Home back in 1998 in Laguna Verde, Chile. The first LV turned out very nicely but, because it was not prefabricated, it was more expensive than I had hoped. I started to do prefabricated work because I was frustrated that as an architectural designer, I could only control the design. I wanted to control how my designs were built as well as control construction costs. With prefab, I am able to influence how my designs are built, and I believe that I deliver a better quality product and service this way.

Modern architecture has been traditionally conceived as something reserved for the very rich - why?

Modern architecture can be expensive because traditionally it is built as a one-off. We have spent over a decade perfecting our prefabricated solution to make modern homes more affordable.

Why do you think your LV Houses have proven so popular with “regular” (not elite) people?

I think what makes the LV appealing to people is that they like the modern aesthetic and the assurance that they’re going to get what they’ve bought. There’s a learning curve embedded in the building process for custom one-offs and many clients don’t want to be part of, so the predictability of design and also the affordability are assets.

Modern design is usually anywhere from 15% to 30% more than normal stick-built, but in our case, it’s usually the same as regular stick-built. While it’s not the cheapest solution, it’s definitely an affordable way to get modern architecture.

Your houses bring affordable design and a “connection to the outdoors”; however, quality affordable housing is often most needed in urban centers. Could you see yourself one day designing a pre-fab home for an urban setting?

The LV Series Homes are highly customizable and can be adapted to meet almost any environment, including urban centers. We can provide a wide range of design services from straightforward customizations like reconfiguring your interior layout to more complex customizations, such as combining and stacking LV models.

What’s the biggest challenge towards making pre-fab affordable for all?

The biggest challenge is time. The devil is in the details, and having the time to figure it all out is the challenge.

Why do you think that pre-fabricated techniques could be the future for architecture?

The future is in prefab and design-build firms. It is now much easier to manage these firms, and consumers understand the advantages in quality and service. With the continual advances in technology and resources, I can’t imagine a future in home building without them.

Do you think that pre-fabricated homes could one day be purchased off the shelf? Say from Target or Ikea?

What needs to be done for the architecture profession to start truly embracing pre-fab design?

I don’t feel like we have encountered resistance. Every year, there are more new prefab designs. I think, like with every good idea, it needs more time to mature to reach its true potential.