Located in the rapidly urbanizing Mladost area on the edge of central Sofia, the new Collider Activity Center, designed by INDEX, draws on the process of the tectonic movement and operations of geological forms as an organizational system to create architecture. The center will be one of the first new buildings to occupy the quasi Greenfield site and the broader urban structure plan for the area will eventually play host to a variety of new facilities, capitalizing on the latent potential of Bulgaria as an emerging economy. More images and architects' description after the break.

In this environment the Collider Activity Center has an important urban role to play as a catalyst in the growth of its immediate urban context. The design makes use of a dynamic geometry, a self-similar fractal pattern that is infinitely variable within a simple set of rules. The form of the two pavilions appear in motion, in the process of slowly sliding towards an inevitable collision with one another. As they come together the landscape cracks and warps creating a varied terrain of surfaces that reflects the language of geological formations. The form is folded to make space for the functions it contains, and cut open to allow south light to penetrate the building and expose views to the surrounding landscape and Mount Vitosha.

The space formed between these two objects becomes a plaza that is partially enclosed by a glass atrium that can be opened and closed to regulate the temperature of the space. Entry to the complex is through this atrium, which doubles as the greenhouse housing exotic plant species from around the world. The functions of the center are divided into the climbing and athletic center housed in the north wing, with the dining, multi-purpose and administration occupying the south wing. Both pavilions are serviced from a below ground carpark and front onto a landscaped park including the pool and other outdoor activities.

As the first landmark in an emerging urban center the Collider Activity Center must be more than simply a place to climb, swim, run, eat and relax. It must be the anchor that attracts new businesses, residents and tourists to Mladost. By creating a dynamic organization of form synthesized with landscape the proposal seeks to create an enduring icon for the future growth of Sofia. 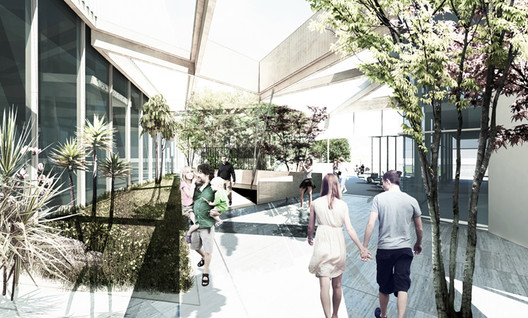