Designed by STRATO, the project proposal for the Collider Activity Center has two primary objectives: visual identity and vitality. Conceived as a sort of natural formation, the entire building is emphasized by the folding panels of the walls, the placement of the volumes and the power that this arrangement represents. Since it is placed in a context of ongoing evolution, their version of the activity center aims to be the driving force of the transformation of the whole district of Sofia, Bulgaria by becoming a symbol for the entire city. More images and architects’ description after the break.

The new Collider Activity Center is thought as a place of entertainment, sports and sociability. The compactness and the articulation of the architectural volume are brought as well to the surrounding park, where the modeling of the terrain, the pathways and the sports areas suggest an energetic space, to be fully lived. The building is visible from the main road and is easily accessible by foot or car. On the ground floor, there are a number of car parking spaces (with a photovoltaic roof) for guests with disabilities. The remaining parking spaces (a total of 85) are located on the level below ground. On that same floor, you can find the changing and locker rooms for the Climbing Hall and for the Multifunctional Hall. The Multifunctional Hall opens directly, through a glass wall, to a performance area and to the park and outdoor activities area.

The ground floor is organized to sort out the different flows of people without denying the possibility of having a visual contact with the various activities. The lobby entrance leads to the café, the offices, the Climbing Hall, the greenhouse and the restaurant. The restaurant has two levels, both overlooking the park and onto the Climbing Hall. The Climbing Hall can be accessed by following a glazed path. This path acts as a filter between the internal and external activities with different levels of shading. External observers can look at people as they move along the access path to the various activities and at the same time they can get a glimpse of the activities being held in the Climbing Hall or at the Funtopia, located on the 1st floor.

The following floors are the offices (2nd and 3rd level) with working stations organized in an open space floor plan. Meeting rooms and corridors overlook the inside of the Climbing Hall and towards the park. At the 4th level there is a rooftop bar that, following the requirements of the competition program, has a large opening that faces south (allowing a good view in the direction of Mount Vitosha) and, on the opposite side, faces the Climbing Hall.

The last level is dedicated to the spa and fitness. The choice of putting sporting activities and relaxation areas in the highest part of the building, equipped with outdoor spa pools, is dictated by the desire of connecting sports and well-being in a virtual path, from the bottom upwards, in relation to the park. The heart of the project is the Climbing Hall, the functional and formal core towards which the other activities are lead. The entire building is designed as a compact volume.

The siding in white metal striped panels highlights the changes of attitude of the different faces, suggesting the idea of lightness, especially in areas in which it is dematerialized into micro perforated panels. The use of micro perforated technology is an expedient thought to make the interior permeable to sunlight (especially the offices, bar and restaurant) but also to transform the entire building into a night lantern due to the effect of light breaking down from the inside during dark hours.

To break the continuity of the metallic folded siding, there are large windows that follow a double direction by looking from the inside out and vice versa. The window of the climbing hall and the restaurant open into the park while the one of the rooftop bar opens on to the city and towards the mountains. The ones corresponding to the administrative floors let direct light in. The use of glass, especially in the part connected to the park, emphasizes the absolute continuity between the interior and the exterior spaces. These are mediated only by the glass greenhouse that, like the volume in the main entrance, is a kind of light base. The volume of the greenhouse can be fully opened through a system of vertically stacked sliding windows that then act as a brise-soleil system during the summer months.

The park is completely modeled by using the land obtained from the excavations to create a sort of topography that is reminiscent of the typical rocky places we go for climbing. There are various altitudes, low areas and high areas. The park is designed to be connected to the building and to the internal activities. In fact, all sports functions are arranged along an imaginary axis (which is also a visual axis) in sequence from the Climbing Hall going out to the pools, the beach volleyball courts and finally the Ropetopia. The sports activities were increased by adding a skate-park and two mini basketball courts.

All around the green area there are green birch trees, bamboo, and Banyan trees and among the trees there are series of mushroom boulders. The fringe of the park is designed as a screen and it creates relaxation areas in such a lively and dynamic complex. The materials range from natural ones as sand, grass, wood and stone to the colored self-leveling cement slopes and playground areas. The different colors indicate the different purpose of the paths: cycling and jogging (with different lenghts). 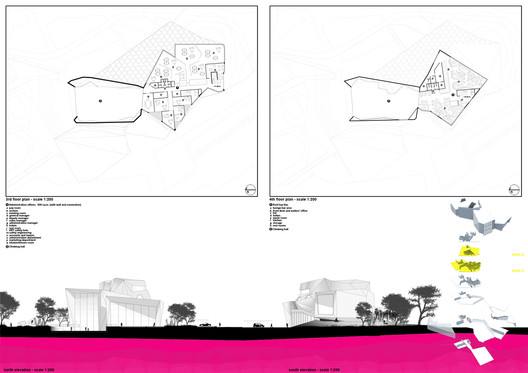