Save
In Conversation With: Will Alsop
Share
Or
Copy

Tell me about your latest project.

I always try to work on a number of projects at the same time; the last completed project is an apartment building in Manchester. It is in the process of being completed at the moment. However, as you know, that is not the end for architecture. What is on the ground comes from what has been on the mind and on the paper. I am working on some furniture.

Sometimes I wonder what is exactly that I am doing. I am currently working on a “sustainable city” in the Middle East [in the Masdar City district of Abu Dhabi]. I really like that region, for the cultural restraints are not defined. It makes your mind work in different ways.

If you are working on a residential development inside Toronto, for example, rightly or wrongly the rules are very well defined, whereas in other parts of the world they are not.

You teach in Austria. Is there anything you wish your students will take into practice?

I want them to set up their own boundaries and convince me that a project is worth spending time on. I always teach them with at least 12 of them in the room and they have to stand and explain to the other students their intentions, with struggles and questions. I encourage them to be themselves, and I believe that is our job. I could teach them how to be like me, but I am not interested in that and they shouldn’t be interested in that. I want them to think for themselves.

What is your firm’s process for starting a project?

It is not defined; there is no methodology written down in any way, shape or form. On the other hand, there are series of habits we fall into. Very often I paint as a way of exercising my brain. As you look at the paintings through the years, they become more and more abstract. You may ask, what has that got to do with architecture? Well, actually, quite a lot. There are colours, shapes and forms. While watching the paint dry, I think of what it is that I would like to do on a particular project.

What do you hope to explore through these paintings?

Sometimes there is logic in them, a genuine exploration. Painting becomes a record of a conversation about a project; for example about a new campus in Glasgow right now.

One of your buildings has become a landmark in Toronto: The Sharp Centre for Design at OCAD University. It is fresh and playful.

Well, I am delighted that people respond well to it. Very few people say that they like it. And if they don’t like it, they really hate it, and I think that is good.

Hardly anybody can remain indifferent about it. But I think it does the job in all sorts of ways. Particularly the inside of the building is received well by the students. Well, it contains a simple idea of flexibility. There are too many walls in there, but you could take them all out at any given point. So one has to accept that the strategy is reflecting their values at the given point, and that can change in ten to fifteen years time. I wouldn’t build so many walls personally, but that is not my decision.

I did think that there are two predominant themes. One is to accommodate students when they are working all day. We have gone high or relatively high in the context of the street, to provide them with a view. While they work on their computers and such, it is nice that they can extend the eye. The building provides the opportunity to do that. And that is why I made very deep window reveals. You can sit and lie or sleep on them.

In the Glasgow School of Art by Charles Rennie Mackintosh, he made a staircase much wider than it needed to be, and that is what people need; he was thinking about them. All that sort of social talking and meeting is what art and education is all about.

I think we make a terrible mistake in our places of work – especially university and art schools – assuming everyone is working at all times. There are occasions during the day that people are not working and that should be taken into account.

It was also important that the building wouldn’t be too precious to work in. The students should be able to throw a bucket of paint without destroying the design. I spent a lot of not only talking to the students, but also to the people who lived around it. They had particular concerns about the building’s design. I just listened to them.

What are your thoughts on the architecture and urbanism of Toronto?

Toronto, for me, is very interesting. I hadn’t visited Toronto prior to 2000. I thought the quality of urban environment was a bit poor back in 2000, although I was looking at it through complete virgin eyes. But now I know Toronto quite well, and there are a lot of things that I like about it.

Within the years that I have been going to the city on regular basis, the city has been changing as well. I think there is a genuine excitement raised that has shifted the nature of the city. It helps the city economically and socially and it’s just fun to be there. I think or I hope that the OCAD building and ROM contributed to that. It doesn’t matter if you like it – it just has to be there with some kind of intent.

I think Bruce Kuwabara and KPMB have some nice buildings in Toronto.

Oh, yes, how one could forget that? Fabulous; it is actually a good building. Oh, Frankie Boy. I think he did pay a little bit of attention. I think his project and ours help the park a lot.

Absolutely; and there should be more of that going on.

You know, I spend some time dreaming about architecture. (I do think it is important that architects do think even though they are not commissioned.) I spent two three weeks ago having ideas about Dundas Square in Toronto and thinking how much better it could be. I was thinking how much better it would be giving Toronto the opportunity of a waterfront. The opportunity was wasted around the First World War. There are advisors that remain nameless, who have less influence on the city now, and that is another reason why the city is in a better condition now.

What do you enjoy the most about your work?

Work makes me happy all the time. Of course there are times that I feel differently. I think the beginnings of projects are really interesting, because you are drawing and there is a process of discovering what the project wants to be. And then you go into the production stage. Important details are not very interesting; there is lots of boring stuff, to be honest with you. And I try not to go and visit my sites, really.

I try. I go to the sites if there is a problem or a threat and try to sort it out. But generally speaking, it is not a singular effort; I have guys and girls that are present on the sites. I like to sit and observe what happens.

Was it in London?

No, it was in Northampton. It was actually the first modern house built in the UK. It was not quite that extraordinary but it was nearby; it was by Peter Behrens and it was built in 1926. All I knew at that time was that it was unlike any other house in that part of town. I made that early judgment and I was interested in it.

I liked the lady who lived there. She would ask my sister and I if we wanted ice cream. Inside, she had furniture that she had originally commissioned Charles Rennie Mackintosh to design. So there was the outside of the house but inside there were great spaces, lots of light, and there was amazing chairs and tables and great artwork. I think that probably began my interest. All I know is that I always wanted to be an architect.

Are there any architectural projects you wished you had done?

I would like to do a general hospital. I think they are the worst buildings to go into. The majority of them are horrible and not very nice for people who are at their most vulnerable when they are ill. And we could do better; so I would like to do one of those.

But to name a building I wish I had designed, I must admit, (and you are the first I have admitted this to): I am slightly jealous of the Seattle Library by Rem Koolhaas. I haven’t seen it in flesh but from photographs in publications, it is a magnificent building. Fuck, I wish I had done it!

What is it that you hope you would leave as a legacy?

I hope people enjoy what I create. I am not sure if I want any of my buildings to be protected. They have a certain life and I think when that is done that is the end of it. And then they become a memory. What I hope before my time is up, I like to think I can change architecture a bit to make it more open and enjoyable. I would like to get away from this thing where we say architecture is a “profession.” Architecture is art!

What would you tell citizens and the general public about the experience of architecture or specifically your buildings? What is it you hope you are doing for them?

People are supposed to be there for quite some time. They get into the metro and get into the train and they are on their way. Sometime the train may be five to ten minutes late and that should be turned into a wonderful experience. That is what we do. It is as simple as that: improving life. 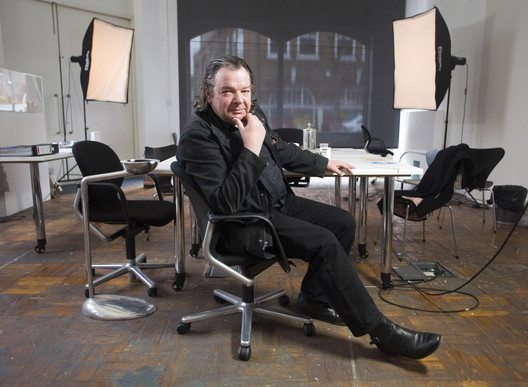