Walltopia, a global leader in the design and manufacturing of artificial climbing walls and grips, organized the Collider Activity Center competition located in Sofia, near the foothills of Mount Vitosha - one of Bulgaria’s most popular tourist destinations. The proposal by Zohar Architects is a 100% climbable structure: a donut-shaped courtyard building informed by the diversity of context. Its volume is extruded using ‘grafts’ of the world’s most famous mountains as formwork to create a patchwork of alpine geo-diversity, with a perfect cast of Abraham Lincoln’s nose from Mount Rushmore prominently positioned to satisfy curious climber fantasies. More images and architects' description after the break.

The 360° view walkway which caps the building offers an incentive for devoted climbers, with the interior program following a similarly rewarding progression from active to passive. Two scalable entrances mark the transition into the building-a chimney and a cave- with the former continuing into the ground to become the second highest climbing wall in the world. The Wallcano’s central courtyard is an actual 450m² graft of land that is cut from Cherni Vrah- Vitosha’s highest peak- to become the heart of the building. The piece removed is replaced with the mushroom boulder park (a required program which is now proposed off-site) that extends Walltopia’s presence to a tourist hotspot.

Echoing a mountain’s change from hiking trail to ski slope in order to accommodate the seasonal shift, the Wallcano and connected park program similarly transform twice a year. Rather than hibernating program during the colder months, their use is extended through a proposed alternation of summer and winter functionality. During the winter, the flexible grid-grip façade can be changed to incorporate Walltopia dry ice volumes for ice-pick climbing. The pool transforms into a skate park, the beach volleyball court into an ice rink, and other program adapt to the weather and facilitate a diversity of climbing experiences.

A rooftop sauna exhausts geothermally-generated steam through vents in the ceiling as the building joins the Iztok power plant chimneys to become a sustainable addition to Sofia's existing artificial mountain range. 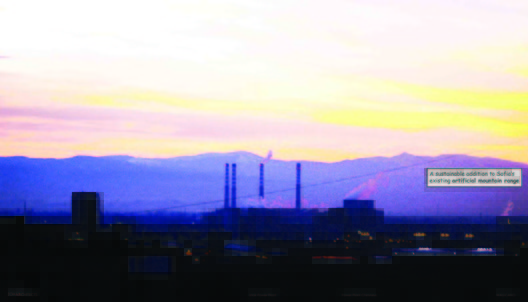