The Exploratory Science Museum was instituted in 2006 as an organ of the State University of Campinas (Universidade Estadual de Campinas – Unicamp), one of the most important universities in Brazil. The Mission of the Exploratory Science Museum is to promote the dissemination of scientific culture in a space that values learning, companionship and social inclusion. It intends to accomplish its mission by unveiling the processes by means of which science and technology are constituted and contributing towards the comprehension of its impacts on everyday life, as well as on the biological and social environment at large.

In general terms, UNICAMP’s Exploratory Science Museum aspires to be a museum that accompanies the most recent trends in museology, becoming both a national and international reference, and attaining the same level of excellence as the best museums in the world. It’s main priority are those individuals that attend schools (elementary, junior high school, high school and college students), without, however, excluding other visitors from its potential public, those that are out of school, that is, that are not currently attending formal education.

First and second place projects after the break.

Being Science the institution and main purpose of this project it becomes possible to reveal in an exceptional manner the relation between Man and Nature. And if in that relation science is concerned with understanding the existing, architecture deals with what still does not exist: it presents itself as an opportunity of expression of Man and his creation, originating a phenomenon of its own. Upon this, two absolute conditions are presented: the singular location where the project will be placed and the universal institution to be manifested.

First, the place reveals us the indispensable need for the relationship between the new museum and the landscape to give rise to an event of territorial scale. The new museum should become a landmark on the horizon as a geographical fact. A museum that observes and is observed. A building that reveals itself and originates a new relation between Man and Nature, Architecture and Landscape. Second, it is crucial that the new museum should, above all, enhance the value of the institution through its architecture, be the Science in itself. The new building should reveal this aspect, be unique and not just a common structure.

Simultaneously the new building seeks through its design, the primal metaphor between the infinite dimension of the universe and the human property of understanding reality through Science: intervention and landscape, vertical and horizontal, interior and exterior, light and shadow, cosmos and individual. Architecture as a determined act of human manifestation, a scientific instrument of learning and identity for the revelation of Science. Thus, it is unquestionable and determining the synthesis of the significance of the museum and its action in the territory. 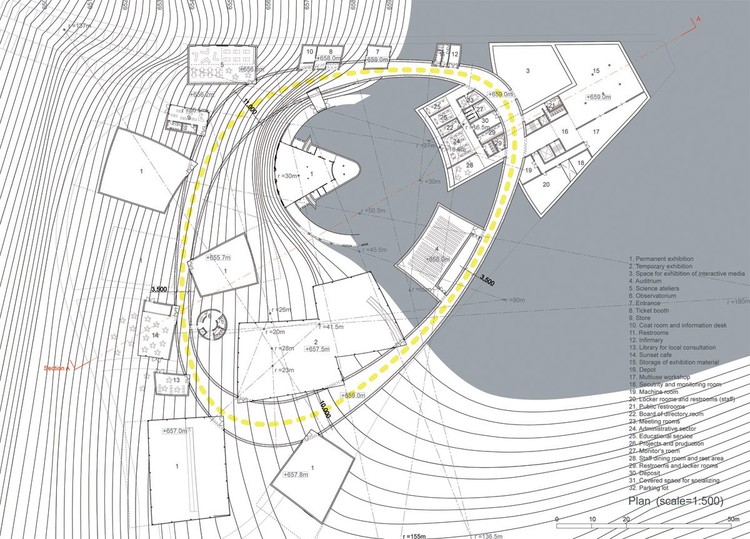 We proposed a new, 21st Century architectural sense for the design of this project, that utilized the space and environment as had never realized before in past decades in Brazil. The rich landscape, calm climate, and brilliance of the sun formed the basis of our proposal that focused on sustainability; reducing the reliance on artificial energies such as air conditioning. The unique architectural design was meant to be as an extension of the environment, to mold the structure onto and into the surrounding land, while enduring over time.

We also anticipated that the citizens of Campinas City would want a design that realized their traditional way of life; one that truly co-exists with nature. This project achieves creating comfortable spaces, as nature intended, by using the natural wind and shade, and is effective in also realizing the importance of alternative sustainable energies and architecture for the 21st Century.

Our proposal for this project was based upon the concept of the . Our necklace design comprised of the or ‘chain’ and had which represented the ‘jewelry’ or ‘stones’ of the necklace.

The double bricked wall formed the exterior circulation space between which exhibition spaces were formed. The ‘chain’ concept of the necklace and loop allowed visitors to walk freely around the museum, whilst interacting with the dynamics of the natural environment such as: sunlight, shadows, wind, mist, clouds and sky. In this way, visitors interact wholly and as part of the exploratory science museum’s exterior and interior design. To explore certain exhibitions in more detail, visitors could purchase tickets to enter special exhibition areas, created by the spaces.

This Loop, or the spine of the architecture, was not controlled by electrical energy (air conditioning, ventilation, illumination, dehumidification etc.), but rather simple mechanisms controlled by the environment and managed by the people. This included the flow of natural light or wind, skillfully distributed by the curved porous walls, liberating the architecture itself from a dependence on machines and energy based installations.

The brick walls were made using the soil located on site. Our intention was to realize the space and architecture based on the conventional materials available locally, for easy construction and maintenance. In this way, the architecture would truly be harmonized with the surrounding environment. The brick wall, which represents the primitive elasticity and toughness of Brazil, would also show its beauty with time representing the closed exhibition spaces, were to be built following the rich landform like houses dotting a primitive village. Each volume had the necessary spec functions and requirements including but not limited to high ceilings, open views, continuity to exteriors, and open spaces. By minimizing the amount of these high spec spaces, our proposal reduced the initial and running costs of the building, and also the environmental impact of machines.

The was intended to be a flexible ‘system’ of space, under which the shape or size of the space can be determined in the process of discussion (workshop) between the architect and the user. At the same time, this system allows for future changes without losing the function or the beauty of the architecture.

To preserve the dynamic panoramic view from the hilltop location, the was designed to slip into and onto the existing landscape. This meant that half of the Loop was set on the existing landform, while the other half was buried under it; naturally realizing the relational potential to the landscape. The horizontal skyline of the as seen from the campus would become the new landmark of UNICAMP, and emphasize the beauty of the sloping hillside.

Science is everywhere around us. Our proposal of the with the exterior circulation space was done so in accordance with our philosophy that the NEW exploratory science museum should be a space where people could directly learn science from the miracle of the surrounding nature and incorporated architecture, and not just from the exhibits in the room. Our concepts are to design and realize lasting architectural structures with ‘strong’ spines. This does not mean making things by using eternal materials. Our intention is to realize a strong ‘SPACE’ designed in and responding to, lasting natural phenomena.

We call this concept ‘Phenomenal Infrastructure’, which essentially means designs and architecture realized with sensitively to the movement of the sun, flow of the wind, landforms, and human and natural activity, beyond any ordinal infrastructure that only exists for efficiency. Our goal is to envision a truly ‘sustainable’ form of architecture not by quantitative measurements but by understanding the special phenomena occurring at each and every site.

Our exploration of the 21st Century sustainable architecture has just only begun.