Designed by architects Povilas Zakauskas, Tomas Vaiciulis, and Kristijonas Skirmantas their 'Buoy Prison' proposal for the Pacific Ocean Platform Prison competition consists of 3 main parts: bearing column, structural ring and regular rectangular modules, containing all prison areas defined in a design program, hanging under structural ring. Separate parts (modules) could be easily replaced by the others or new extensions could be added if needed. This makes the whole prison system flexible and adjustable to always changing requirements. More images and architects' description after the break.

Site was the main factor that influenced the concept of prisons volume. Ocean creates a constantly changing but at the same time homogeneous and unrestricted environment that determines the volume of prison to be simple, iconic and geometry equivalent to all directions. We decided that circle is a shape that matches all these requirements the best.

All vacant places under the structural ring is efficiently used by a dense grid of rods, using kinetic wave energy to provide building with electricity. Round roof structure provides modules with natural shadow but at the same time it contains many cracks, letting sunlight to reach rooms that require natural insulation, and form a rectangular graphical drawing, which exposes very clearly during night time and creates strict mood of prison.  All ring consists of permanent steel frame which is covered with light sectional façade plates, that could be easily adjusted if module combination changes.

Wave power is renewable, green, pollution-free, and environmentally invisible. Its net potential (resource minus "costs") is better than wind, solar, small hydro or biomass power. Wave energy contains roughly 1000 times the kinetic energy of wind, they are quieter and much less visually obtrusive. Unlike wind and solar power, power from ocean waves continues to be produced around the clock. It’s certainly a tantalizing prospect to think that we could gather usable energy from the natural forces at work on water's surface.

We chose Buoy systems that use the rise and fall of ocean swells to drive hydraulic pumps. The generators are mounted in the roof construction. Rods connecting buoys and generators play an important role in creating always wavering prison image, obscuring the massive central column and making the building disappear in a vibrant oceans environment. A series of buoys rise and fall with the wave. The movement "strokes" an electrical generator and makes electricity that is accumulated in the plant room and used for building’s needs. 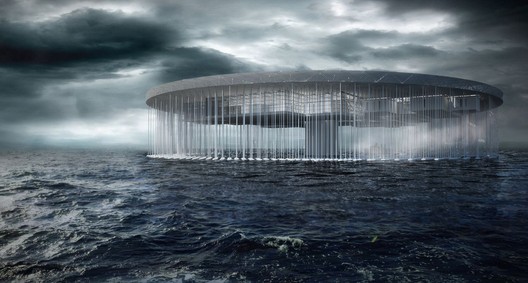 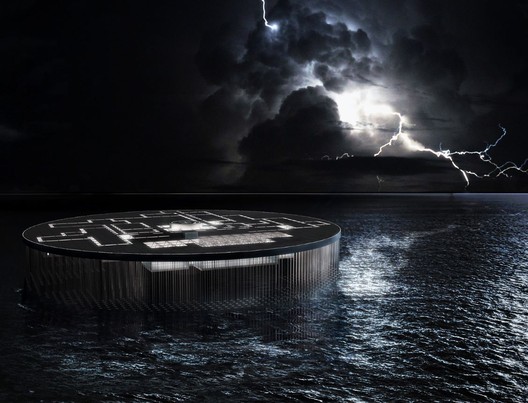