Science and technology evolve at an astounding rate. They are in constant motion and change, with such fierce speed that both surprises and excites. The non-stop evolution is boundless, and it gets faster and more dynamic every day.

Companies, industries, laboratories and research centers devote energy and make investments to discover new ways to enhance and consolidate a variety of products in general. The spaces that showcase scientific and technological progress have become hubs of social interest, where magic and fantasy of the near yet unknown future attract like a magnet that boasts an amazing array of features.

In mankind and nature, science and technology have uncovered a universe of solutions and answers that not only shapes a better future but also brings all the bits and pieces together. Nature serves as the middleman between mankind and science; there lie its strength and bright future. The virtual world has taken on paramount importance and plays the leading role in today’s stage.

To be able to design a unique building that reflects science and technology as an expression of the new avant-garde chinese industry, many questions must first be asked: How should a building that hosts hi-tech chinese industry production, which also takes advantage of the evolving and ever-changing scientific advancements look like? What should its materiality and image be?

Should such a building reflect a specific period’s architecture or should it instead uphold abstract and timeless notions that stand the test of time, so it won’t become obsolete like signature or trendy architecture and fleeting language?

How should the building convey the dialog among science, technology, nature and mankind, while the latter, its end-user, reaps benefits from the associated discoveries and advancements? Beijing’s cultural park is a place that possesses the everlasting identity and character of nature, in spite of constant changes through the seasons.

How can a product within a natural landscape manage to be unique, while conveying universal values within the frameworks of a virtual world (which represents the fleeting and the abstract)? The building must be able to convey to the visitor the aforementioned magic and fantasy, and act as a marketing tool as well. It’s the industrial park’s showroom; aside from stimulating trade, it must also let the world know all the intense production and research.

The building merges with the lake’s natural environment. It’s both below and above the water. The statement is bold and overwhelming. While the building stealthily blends in with its surroundings, it does so so seamlessly that it tends to vanish.

The new center of science and technology has its foundations on land. By burying the building and widening the lake’s surface, the land cleared during excavation will be used to build a hill, which will allow access to the public plaza on its roof from different areas of the park.

Once the lake’s surface is widened, the building will naturally blend in, with abstract resoluteness. Science conveys these concepts that the building offers with audacity and authority. The aforementioned hill embraces and protects the building from cold northern winds. It will be a green slope where the public plaza can be seen afar.

Once the excavation and the construction are finished, water will fill in the lake again to complete the landscape. The dialog among the lake, the park and the building is a landscaping operation of great creativity and inventiveness, and it will bring new sensations to the general public.

The building acknowledges the virtues of the exterior, and it warmly welcomes nature’s presence. The lake and the adjacent scenery offer an opportunity for the building to converse with its surroundings, while maximizing its presence and blending in with subtlety. The pure and simple outline of the building stands out at a distance, yet it merges harmoniously with the cultural park’s landscape. The building conveys universal and eternal notions. It is easily recognizable not because of its extravagance but because of its resoluteness and uniqueness.

Accessing the building evokes the idea of descending into the depth of knowledge, of experience, of history and of life itself. Accessing the building through water’s nature conveys timeless notions that will last forever in individual and collective memories. The building shows solidarity. It generates a public space on its roof (the science and technology plaza) as a way of integrating itself with and bringing in people.

The building’s materiality as seen from the outside reflects the image of the surrounding element: water. A subtle water curtain establishes the building’s image. In different seasons (except chilly winters), water flows along the façade in a loop. When the building is closed, the water curtain is shut down: the scientific concept of transformation and change is thus added to its image. One can then enjoy a different and unique view.

Where needed, glass and water come together in the form of “water wall” systems to generate a blurry and abstract surface by trickling water over glass. The substance of water is eternal and universal. It never goes out of fashion. It ensues from the dialog with the environment and the previously mentioned interpretation among science, technology, nature and mankind. These four pieces fit together perfectly and spawn an industrial product, which by transforming nature and its matters, enriches life.

Water is the go-between the exterior and the interior. Its sound yields an added value as a tool of design and innovation. It’s a substance that speaks for itself and it’s capable of generating subtle moods and delicate artistic moments. The covered space on the roof is a big public plaza. The science and technology plaza is configured by water mirrors and pathways, access and leisure situations. It will be a great place to meet and interact. As if emerging from the lake, the plaza will be partly covered by water. Beyond its natural impact on the scenery, the water shields the inner space from beijing’s climate.

By following chinese landscape traditions, the large ponds on the roof recreate and multiply the surrounding lake, and they offer views from a vantage point which resemble those of an artificial island floating six meters above water. When taking a brisk walk, one can’t help but feel a sense of pride to be standing over china’s great industrial production. The water of the ponds set in motion by breeze or rain will freeze during winter, thus changing the scenery with great sensibility.

In summer, fall and spring, the water mirror will provide protection against heat. In winter, the frozen water will work as a thermal barrier against outside temperature as low as -20 degrees. Aside from the surrounding lake, the frozen surface will also serve as an ice skating facility for the general public.

The concept of infinity, conveyed by science, is ever-present. The pathways converge. Circular pathways are endless. The building can be accessed from the plaza. A lookout captures the whole scenery. Elevators and escalators lead visitors towards the inner space below the lake’s water level.

Its technological materiality induces the possibility of transformation, and allows it to communicate, like a lighthouse, messages and images that are easily recognizable from a distance. Large bleachers of contemplation is directly over the effects theater. Natural light filters through rows, illuminating the underground hall and exhibition area.

The building’s main access is through the park’s southern sector. A footbridge located 1 meter below water level in the vicinity of the subway station and the park leads visitors in. It has a sensuous and artistic feel. It preludes the unique spatial experience that is to be lived inside the building.

There are 3 accesses toward the upper public plaza, located in the south, east and west sectors of the park. They establish a pedestrian circuit that consolidates surrounding traffic streams. The vehicle access and the loading and unloading area are located in the northern sector of the park, behind the man-made hill.

The inner space conveys science’s complexity and the concept of technology. From the inside, one can enjoy the water curtain’s artificial nature and perceive the underground space of the exhibition and conference areas. A clear organization is coupled with perimeter traffic along the path of science, which adds value by graphically and educationally unveiling history, evolution and the coming future with audiovisual aids. 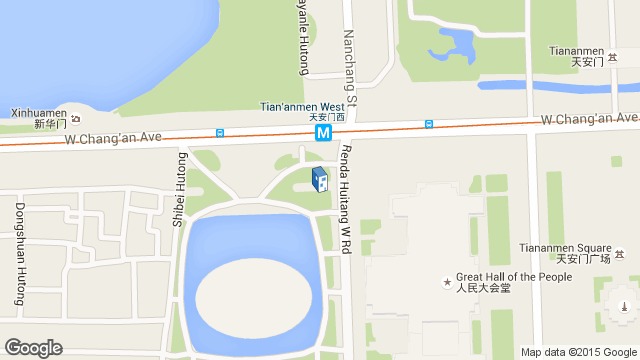