The proposal for the Industrial Arts Center by Stefano Corbo Studio pursues a double challenge: from one hand, to re-activate and reconvert the existing building through new functions and a contemporary language; from the other hand, to focus attention on the public character of the intervention, in order to allow citizens to gather and share the activities of the Art Center during the day, according to the prescriptions of the Brewery District. More images and architects’ description after the break.

“From Program to Use” wants to reconsider the importance of the idea of use in the conception of an architectural work: in our case, the program is just the starting point to design spaces where notions such as experience, movement, perception, atmosphere become fundamental. The Rapid Electrotype Company Building, a 1 story structure built in 1900 and located at the base of a steep hill, will be the central nucleus of the future industrial arts center: rather than manipulating its exterior shape, the building will be restored and transformed into a public mega-foyer.

It will act as a collective-distribution space where you can enter the disparate functions of make and live, but also can spend some free-time, have a coffee, buy something, or simply take a walk around the hill. In this way, visitors, workers, and people in general are forced to enter and visit the ancient building, with its massive columns and its rough-industrial aspect, and can use it even when the regular activities of the Center are closed

Starting from the Rapid Electrotype Company Building, “From Program to Use”develops its complex program and its formal configuration: the existing structure will be wrapped and incorporated by new functions: on the left side, we will find the Light Manufacturing Studios, with their own private entry and exit, but at the same time with their direct connection with the other functions; on the right side, we have entries for the LIVE PROGRAM, whose housing units lie on the top of the existing building;  finally, behind the new Industrial Arts Center, we have an outdoor public area,  for summer manifestations, concerts, and other events.

So, the existing structure will be the fuel for a general renovation process that will invest the competition plot and the Brewery District.  The Rapid Electrotype Company will be central in the definition of the new building not only from a programmatic-distributive point of view, but also physically. “From Program to Use” tries to open the new Arts Center to the city, offering the possibility to experience new facilities and options for Cincinnati.

If the first design decision was to preserve the former factory and respect its formal definition, the following step was to condense the distinct functions all around it through a linear-compact building.  So, a dichotomy has been created: from outside, the new building appears as a long transparent and translucent element, where every activity and action is visible; from inside, everything changes: the former factory contains many functions and act as a labyrinth, where people can walk around glass boxes.

Every function has its own aspect, form, and dimensions. So, to enter the building turns into a new experience, stimulating the perception and the individual aspirations of the user. So, the linear and rational aspect of the exterior is opposed to the apparently chaotic and informal interior, which works as a fragment of a contemporary city, where everything is heterogeneous and flows incessantly.

One of the main aspects of the proposal is its open character: the overall design is conceived to be modified, adapted and manipulated according to the future necessities and desires: that’s why both housing units than maker-in- residence units are designed to be flexible and extendible, thanks to its modular standards. The initial configuration is of 18 units for live Program, and of 4 for Maker-in-Residence. To increase the number of the units is quite simple: it’s just about to add modules, and modify the circulation spaces.

Every decision about materials and costs of construction takes into account the Living Building Challenge standards:  thanks to the use of u-glass, and polycarbonate panels,  it’s possible to build a modular building,  which allows to manage and control great amount of energy, reducing maintenance costs and saving money for heating and hydraulic systems. The right use of these materials will create a well-tempered environment able to achieve the optimization of the energetic functioning of the building. 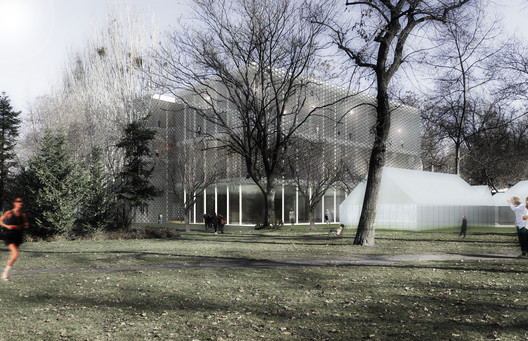