Save
AD Round Up: Houses in Brazil
Share
Or
Copy

Brazilian architects have always surprised us with their architecture. You can see some creative houses from Brazil previously featured on AD with this last Round Up of the month!

Joanopolis House / UNA Arquitetos The house was designed for friends who used to visit Carambó, a farm two kilometers away where we built a pavilion in 2002. The region is located at the foot of the one thousand feet high Mantiqueira Mountain, on the border of São Paulo and Minas Gerais states. The condominium is located along the banks of Piracaia Lake which belongs to the water supply system of the capital (read more…)

Osler House / Marcio Kogan In front of the entrance of the Osler House, located in Brasilia, there is a panel of tiles by the artist Athos Bulcão, designed especially for this wall. Dozens of buildings in Brasilia have panels by Athos, among them are: Planalto Palace, Itamaraty and the National Theater, all by Niemeyer. The artist’s modular tiles are an outstanding feature incorporated into the modern architecture (read more…)

Rio de Janeiro Residence / TAMABI Two basic principles guided our project for the construction of a new penthouse foor to house a single 234-square-meter apartment, located at the base of the Corcovado Mountain in Rio de Janeiro’s forested Jardim Botânico neighborhood. The first was a demand for an open space with the least possible amount of internal subdivisions, with the intent to provide good cross ventilation (read more…) 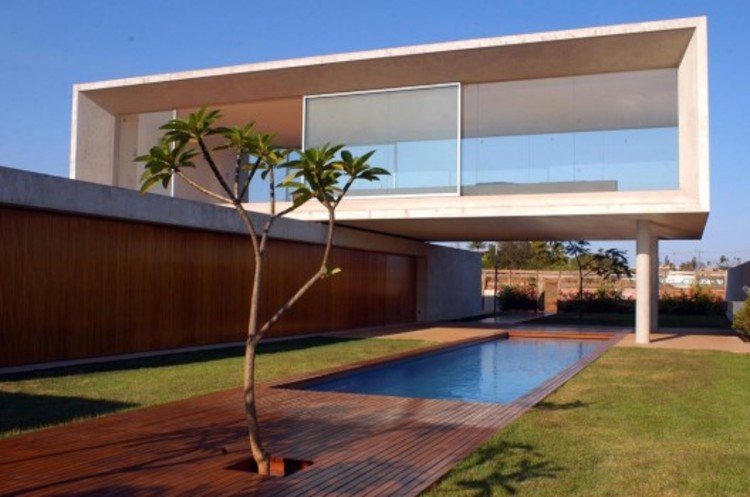 Bento Golçalves House / Studio Paralelo The house is located in the city of Bento Gonçalves, mountain region of Rio Grande do Sul – Brazil, in an area that originally was part of a rural site. The proposal was developed for a couple that will receive, eventually, its three children. The land, almost a square, 32 x 30 meters has flat topography broken by a smooth declivity in the North limit. Next to that natural irregularity, a set of araucarias trees (read more…)

Carapicuiba house / Angelo Bucci & Alvaro Puntoni The most remarkable feature of the site where the house is located is its depression, in topographical terms. From the street, we cannot clearly see its ground level because the ground surface falls abruptly into a little valley and woods: a stage 6 m below. The program joins two different purposes: a house and an office, it is a place to both live and work. Although these two functions share the same space, it is as separate as possible (read more…)