Children curiosity is the tool for a wider reflexion about different ways and velocities of interact and percept daily spaces, depending on our age, using one Portuguese traditional materiality applied to exterior doors to protect from sun and insects, usually rejected and depreciated by contemporary architecture.

In the context of the Festival des Architectures Vives at Montpellier (18th-21st June), on the theme “Ephémères Curiosités”, ateliermob purposed to reinvent children’s universe on one antique mansion’s courtyard of Montpellier. 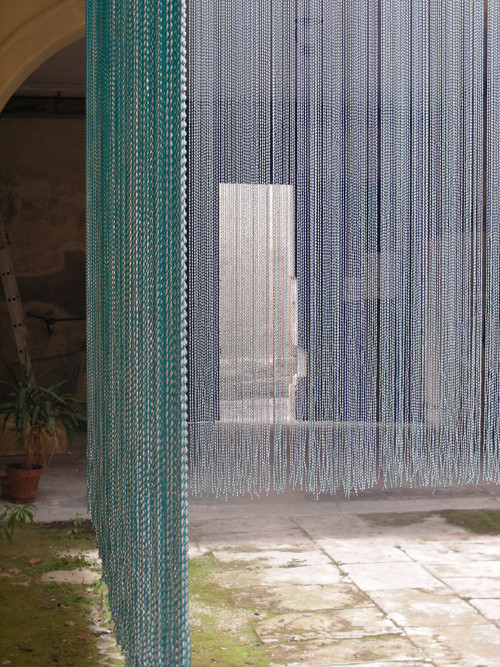 An universe that can interact with children and provide them the sense of proportion and scale as long as the possibility to explore their curiosity, over and over, continuously searching for changes in the surrounding space through their own imagination. An intervention that can gain different meanings depending on its form, and enhancing it just because of its ephemeral character. But not only children will achieve alternative spatial versions of the same place. Any other visitor will always have a new perception and will be curious to assist to the spatial evolution. The intervention will contrast with the permanent and solid character of the building’s courtyard and the preservative patrimonial character of the surroundings, turning into an attraction, calling people in to observe or to interact.

Inspired by the work of the Venezuelan artist Jesús Soto (1923-2005), focusing on the desired uncertainty or on the will to contradict permanence/immutability and by the Portuguese traditional plastic stripes anti-fly and shadow door’s structure, ateliermob reconfigured one courtyard of R. Vallat at Montpellier.

Starting from the solid and permanent (the existing building), ateliermob intended to rescale the courtyard to the children universe, signalizing small details of the existing architecture, changing overall perception and creating different layers of transparency.

The agitation of the plastic stripes, produced by visitor’s movements or by the wind, gave the desired sense of mutation and movement, and children curiosity played a decisive role on this lively architecture.

Next September, ateliermob will be participating at Experimenta Design 2009 (Lisbon), with an intervention following the same principals.