With more than 300,000 sqm dedicated to almost every possible brand name, the CentralPlaza is the biggest shopping mall located in Bangkok, Thailand on Chaengwattana Road. Manuelle Gautrand‘s office took over the project with studies already well advanced by another firm because the client was looking to improve the overall design. Gautrand adopted a pragmatic approach that consisted of modifying contours and overhauling façades. The firm “concentrated on asserting a graphic presence strong enough to change the way volumes are perceived, innervating and expanding them to increase their legibility.” In an interview with Florence Accorsi about shops and leisure facilities, Gautrand explained, “We live in a consumer society, so business is all important. At the same time, retail outlets have become rendezvous places where people go to do more than just shop. They are there for an outing, to have fun, relax, meet other people… This gives us an opportunity to re-think these places and renew their identity codes, to redesign their architecture and space so as to introduce variety and unusual things in their programming.”

More about the shopping mall after the break. 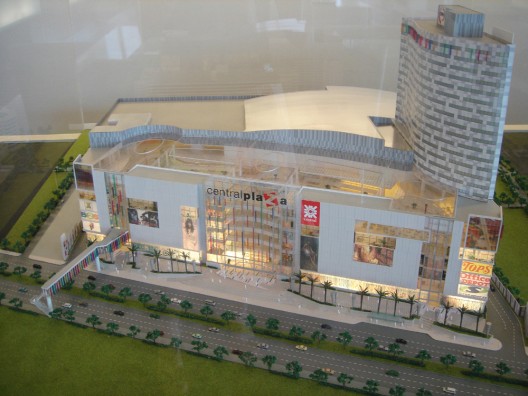 The existing project consisted of two relatively simple volumes: the main volume for the retail and parking and another volume, connected to the first one, with office in a tower.  With the existing project almost at the construction phase, Manuelle Gautrand wanted to respect the other firm’s design yet add “something very strong and powerful, without modifying deeply the project.”

“We kept the proportions of glass and concrete, but we tried to simplify the grid on them, the connections and all the graphic details…the volume must give the impression of a smooth and elegant volume in a sort of pearly white envelope,” explained Gautrand.

Inspired by lines and movement, especially the flow of people in such a space, Gautrand worked with kinetic objectives, which can “send messages of flow, movement and fluidity”.  The architects created a series of continuous red lines that encircle and wrap the building.  The lines follow a “progressive intensity, which corresponds to the importance of each façade.” For instance, the main façade is covered in lines, while lines on the second south façade are quite rare.   The perception of the outlines changes depending upon the user’s angle of vision.   ”The wish was to play with the advertising, and to emphasize it. Describing sharp or smooth turns around the advertising, it’s a way to highlight them to give them a central position, everywhere. In the same time it’s a way to prolong the red lines and never to forget them or to interrupt them,” explained Gautrand.

The lines are rectangular tubes measuring 50×15 cm illuminated with LEDs.  The tubes are structural as one of the faces is a metallic structure, which is directly connected to the main façade. The three other faces are covered with transparent red Plexiglas which is made with one folded panel.  ”There could be a lot of ideas about the movement of the light: The red lines could be illuminated sequences by sequences: Some of them could be switched off sometimes, or the led could be illuminated progressively to create a huge movement….Starting from the plaza and footbridge, the rhythm and graphics govern the entire project, tip-to-toe, end-to-end,” explained the architects.

The idea of the red lines does not simply clad the structure, but also forms interior work, the landscape, extends to the tower to elongate its form,  and even morphs into the parking lot to create parking spaces.

All images courtesy of the studio.