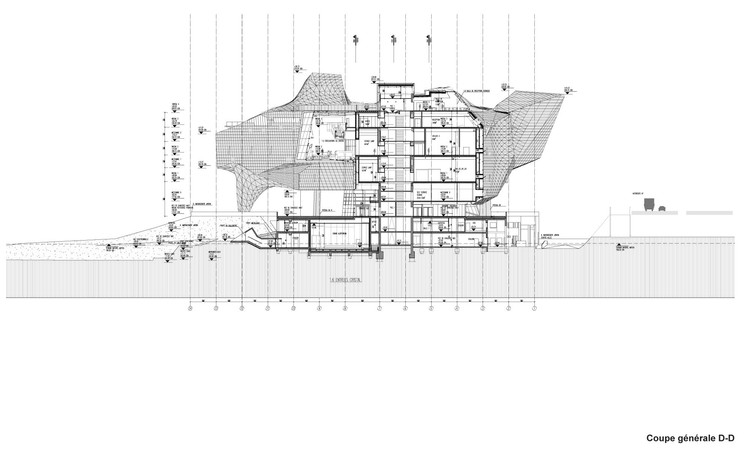 The Musée des Confluences in Lyon, France, is currently under construction and scheduled for completion in 2014. The museum is designed by COOP HIMMELB(L)AU, in coordination with local architects and engineers. The goal of the design is the development of a space that is at once a museum for accrued knowledge, a public space of discourse, and an urban leisure space.

The building is hybrid of multiple typologies in an effort to align itself with the principles of the museum, which presents itself as a public place that provides access to the knowledge of our age.  The architects’ describe, “Innovations develop within inter-spaces, within indistinctness, within the overlapping and hybridizing. Questions regarding the future will be decided within transitional fields situated between technology, biology and ethics that are the central themes of the Musée des Confluences.”

The resulting architecture is a mutation of form, characterized by the hybridization of various programmatic functions and building typologies.  The different components combine to create the new shape of the museum, which is an extension of the park on the southern tip of the island on which the building is located.  The landscape of the interior and exterior consists of ramps and surfaces that transition between inside and outside, creating a dynamic sequence of spatial events. The various exhibition halls have unique spatial structures that can alternate and change the architecture to accommodate different events.